My grandmother was very fat
and her presence expanded when anyone got near her.
She was a big personality,
and she walked like an actress.

Her lips were big and red,
and she had a beautiful smile.

She wanted all to worship her
and love her as the mother of the world.
She would take her shoes off
and walk barefoot on the fields.
She would hug the trees and smell the air.

She talked about positive energy,
magic flowers and eternal souls,
about the future and the stars,
about fate and luck.

One day, my grandmother became a trapped crazy mind
in a vegetable body.

She had big blue green eyes,
opened to see, taste and touch.
She spoke binary language,
like computers.

Her body became dry
and smaller and smaller.
She was becoming a baby again.

Suddenly, when she was about the size of a butter bean,
she died. 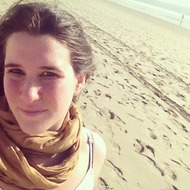