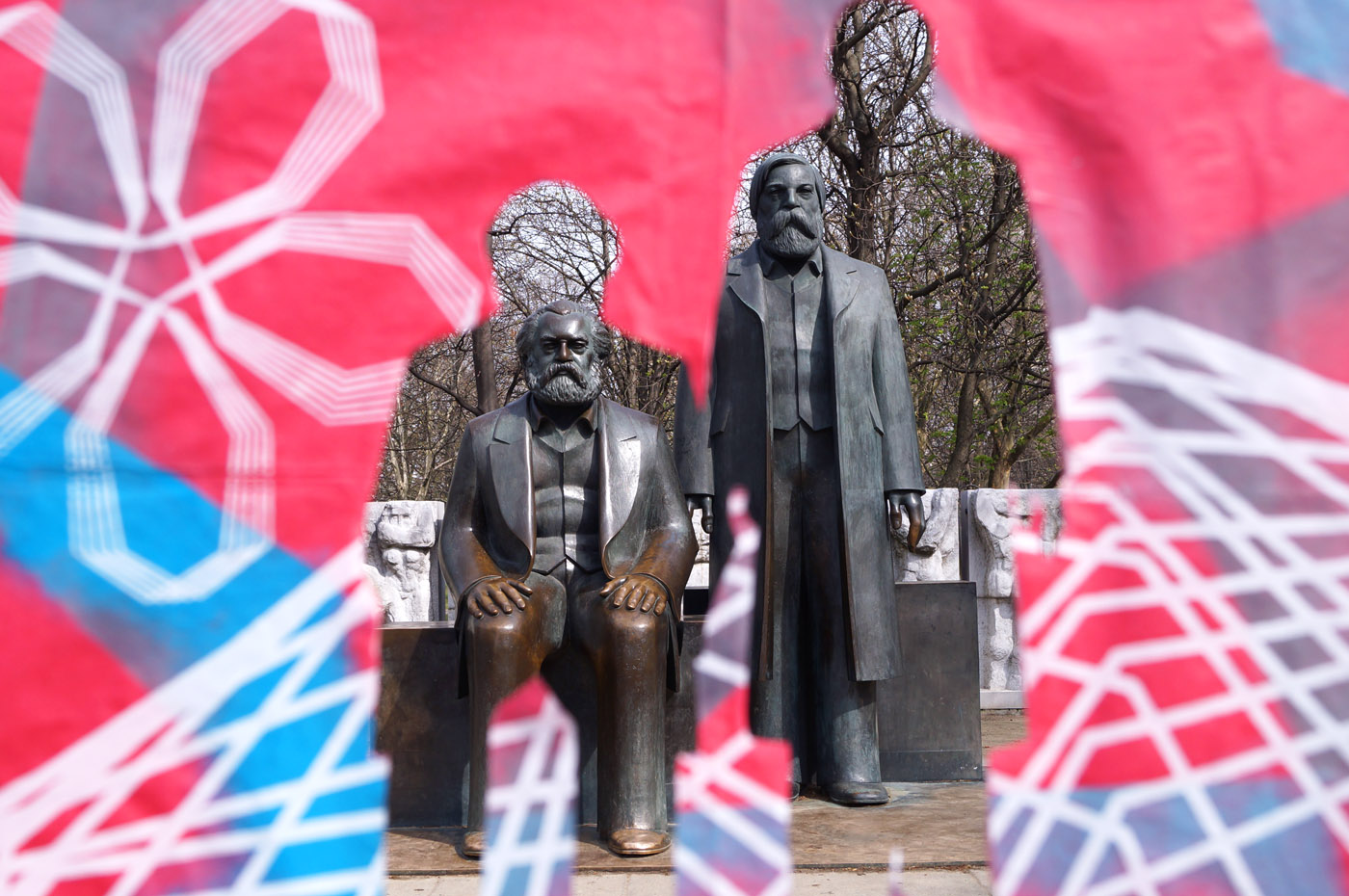 From the April 28th to May 2nd, the bronze figures "Karl Marx and Friedrich Engels" by sculptor Ludwig Engelhardt will be enveloped with a cover of thin, colored paper layers by artist duo Various & Gould. The paper encloses the monument without sticking to the bronze itself. In a next step, the paper cast will be opened and removed without residues like the snapped skin of a snake or a fruit skin - therefore its name "City Skins". Afterwards, the bronze figures will shine in the same splendor as before!

Monuments are projection screens of collective memory and witnesses of a time period. They reflect history, zeitgeist and models of a political system. In their current project, Various & Gould address this topic, questioning the multiple meanings and ascriptions of public cultural artifacts and the general approach to monuments nowadays.

After the monument's 30th anniversary in 2016, 2017's jubilee of 150th years since the first publishing of Karl Marx's "The Capital" (first volume) and Marx's 200th birthday in 2018, the writings of Marx and Engels are currently undergoing a renaissance, not only because of prevailing financial crises, global social inequality and globalization-critical movements.

The Marx-Engels monument serves as a remnant of another epoch, which although is still visible after the political upheaval of the reunification and even a popular tourist attraction but whose future is uncertain in the wake of the ongoing construction works in this area. The painted and silkscreen printed paper mould shall temporarily provide the figures with a new visual appearance being used as a public communication platform gaining center stage again. Working in the public urban space and interacting with passersby is thereby an important part of the project.

Following this, the "City Skin" will be literally transported from "Mitte" to the "Pampa" (from the centre to the periphery) and after a ceremonious inauguration on May 20th at 3:30 pm presented on the stele field for "Hellwichstorp" near Cottbusser Platz in Berlin-Hellersdorf until May 28th.

“City Skins – Marx and Engels” is a project by artist duo Various & Gould as part of the international competition “Art in the Underground – The Middle in Nowhere” (in German: “Kunst im Untergrund – Mitte in der Pampa”). The competition is run by the art society “neue Gesellschaft für Bildende Kunst (nGbK)“.