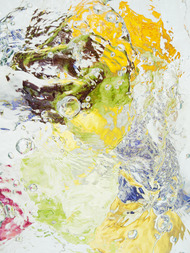 Since majoring in food science at the University of Tokyo in 2009, Yuichi Nishihata developed a strong interest in food. While working as a chef after university, Nishihata noticed how much food was being thrown away at the end of his shift and thought deeply about food consumption and how he could show this as a visual statement. His images are based on this – the juxtaposition between natural food stuffs and what Nishihata calls the “super quick mass consumption age”. All his work is based on the coexistence and relationship between nature and human beings.