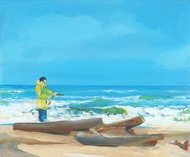 Born in 1949 in Mass. / USA.
Started painting at age 10.
Lived in Toronto, Canada from 1970-1980. Made a living as a handyman and as a painting artist. Moved back to the USA, to San Francisco in 1980. Resided there for the following 28 years. Worked as a freelance artist, -handyman and restored furniture.
Extended creative work during the years 2001 - 2008 :
Built furniture out of driftwood, collected at the beaches of the pacific ocean, designed and built the stage sets of a theatre project and painted several murals in SF. Since August 2008 living permanently in Berlin. Focus is back on painting on canvas at the art-studio, the 'LadenAtelier Brennan’ in Berlin-Neukölln.