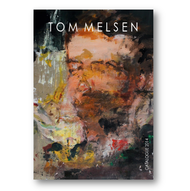 Tom Melsen is an up and coming artist who lives and works in Rotterdam (The Netherlands). He is active in a number of artistic fields but best known for his abstract works made with watercolour, pencil and mixed media. His collection of paintings consists of mainly red, black and white abstract studies, on canvas. Melsen has a very distinctive style and uses strong colour contrasts. His art is often thought provoking, dramatic and powerful.

Besides painting Melsen also spends his time working on poetical works, collages and a variety of musical projects. Being very much inspired by the DADA movement, Melsen’s aim is to provoke an emotional reaction from the audience with all of his artistic output. He is not interested in following any known rules and describes his art as “an organized mess”.

Melsen did several (spoken-word) performances, introducing the audience to the mysterious and sometimes controversial world of his poetical works. Over the years he also composed several soundtracks for independent film projects. Melsen works with field recording as well as non-musical instruments.