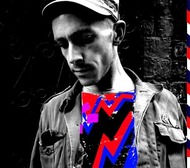 I am a musician and writer from Liverpool, UK. I have been involved in many projects, including theatre shows, street performances, festivals and films.
I have played in many bands in the UK, and currently I am performing solo with acoustic guitar.
I also do performance poetry, which I often combine with songs in my performances.
I have staged many shows in the UK combining these elements with drama and multi-media.
I have also appeared at festivals and on national television in the UK and been published on several websites.
I publish my own poetry and music zines and write for The Stool Pigeon music newspaper.