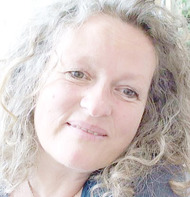 I´m a Berlin-based artist and my main focus is the union of visuals and words in one piece of art.
Sometimes a new piece starts with a visual expression and the words come later, sometimes it´s the other way around. In any case it´s never one only illustrating the other, but both together creating something new that is more than each of the parts could be.
Right now I´m working on adding paintings to a manuscript of prose poetry that I wrote during the years when I lived in Canada ( 1998-2007). Originally written in English I´m in the process of rewriting it in German and adding visual art.