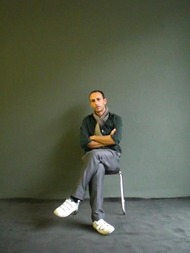 Moved to Berlin in 2002 with a residency at the Kunstlerhaus Bethanien. In 2004 was awarded with a Arbeitstipendium der Senatsverweltung fur Wissenschaft, Forschung und Kultur in Berlin .
Nominated for thr Uniao Latina Prize in 2005.
In 2006 had a working grant from Fundacion Marcelino Botin in Spain. IN 2008 he went to Shanghai to develop his photographic work with a Oriente Foundation Grant. In 2005 together with the artists Sergio Belinchon, Santiago Ydanez; Paul Ekaitz, and Antonio Mesones he founded the Artist Run Space Invaliden 1 in Berlin .
In 2011 he was nominated for the artist residence Vila Aurora in Los Angeles, USA.