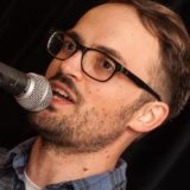 I'm a US-born English-speaking stand-up comedian and comedy scene organizer living in Berlin, Germany. I co-produce and host the weekly "We Are Not Gemüsed" comedy open stage at Sameheads in Neukölln with Caroline Clifford. I also produce the "Comedy in Sin" showcase at Fabelhaft in Kreuzberg and am part of the Post Humor sketch collective. I perform regularly around Berlin and am seeking for ways to build the quality and reputation of the local comedy scene.