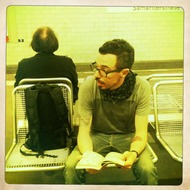 I was born in 1977 (when everything concerned with music died) in a small town called Torino.
I attended Sae School in 2001 and started to work as a freelance producer/engineer in 2003.
I’ve worked with some of the best independent musicians from Italy and all over the world in the studio (I’ve owned 3) and live as FOH engineer.
I'm running a small DIY label called Triste (www.robatriste.com).
From 2011 I've been living and operating in Berlin.
D'u want your music sounds better? Just drop me a mail :)