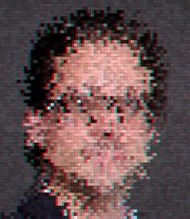 Mark Bern, born in 1979, is an emerging artist from Zurich, Switzerland. As an internet entrepreneur he founded several web startups and sold two of them to listed companies.

For more than 20 years, Mark Bern creates digital art pieces by using computers and software programs. In early years as a teenager he spent his days with his first computer (Commodore 64) playing around and using the limited possibilites to create digital visual effects.

Through his artworks Mark Bern creates abstract and colorful shapes far away from the genre clichés. Trying to summarize his style is difficult, but you can say that Mark Bern is focusing on digital art and computer art, combining several elements of pixel art.

Mark Bern has been creative without showing his artworks to others for more than 20 years. His first pubic art collection "Marbella" was released in 2013 including the art pieces Beach, Champagne, Garage, Gibraltar, Heart, Malaga, Sand, Sky as well as Swimming Pool and was inspired by the landscapes and atmosphere of Analusia. Each art piece of the collection "Marbella" is limited to five pieces and the used materials are aluminium and dibond plates.