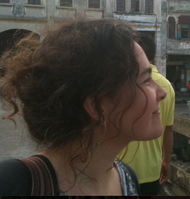 In the tradition of the artist run centres in Canada I am a cultural catalyst which is to say I am various people at the same time: artist, curator, producer, cultural manager.

I have directed the Canadian 3D Film Innovation Consortium (3D FLIC,) and lead the first Toronto International Stereoscopic 3D Conference. Other posts include organizations such as: Toronto International Film Festival (TIFF,) Berlinale, Planet in Focus Environmental Film Festival (Canada) and the City of Buenos Aires (Argentina.) Currently, I am co-directing the Karneval der Kulturen in Berlin at the Werkstatt der Kulturen.

My video-works are distributed by Vtape and Group Intervention Video, and have been exhibited internationally, including: Haus der Kulturen der Welt (Berlin,) InsideOut (Toronto,) and Sanhe Museum (Sanhe, China.)

Exhibitions curated include various programs of experimental video work for various institutions and Festivals in Canada, South America and Germany.

I completed a MFA in Media from the Slade School of Fine Art - University College London (UK,) a DAAD Fellowship in Art and Media at the Berlin University of the Arts (Germany,) and a Hon.B.A. in Semiotics/Communication Theory and Drama from the University of Toronto (Canada.)