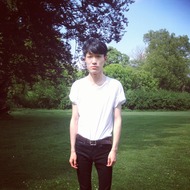 ISAAC CHONG WAI is an artist based in Germany and Hong Kong, MFA student in an international awarded program Public Art and New Artistic Strategies at the Bauhaus-Universität in Weimar in Germany and received his BA in Visual Arts (Hons.) from the Academy of Visual Art in Hong Kong Baptist University. He works with diverse media, including performance, site-specific installation, public art, video, photography and multimedia. Chong’s work, “I Dated a Guy in Buchenwald,” was selected to Moscow Biennale for Young Art 2014. His video, “Equilibrium No.8 - Boundaries,
honorary mentioned at the Award of the 2nd OZON International Video Art Festival in Katowice, Poland, in 2013. He was awarded the first runner-up prize for the 2012 Hong Kong Contemporary Art Award. He participated in IAM (International Art Moves) in Dresden, Germany in 2012. Chong had also been shown in a solo-exhibition “An Unknown Artist” at the Academy of Visual Arts Gallery in Hong Kong in 2011.