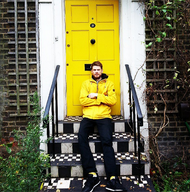 I'm a 29 yr old graphic designer / music producer from London, spending the summer in Berlin , doing some design work but also focusing making on music. I mainly make techno & house, which had an influence on my decision to spend some time in Berlin... Not just that though, it's one of my favourite cities!

I'm a sociable guy who loves cooking, music, art, cycling, film and travel. I can speak a bit of German, and I'd be happy to practice it!

I'm considering turning one of my music videos into a live show to perform at a festival, so I might look to collaborate with a motion designer over the summer.