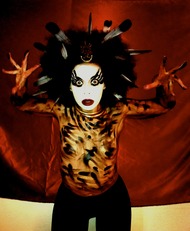 Valerie Renay is Berlin based French-Caribbean performer, director, electronic pop chanteuse, musician, vocal coach, painter, DJ
She enjoys collaborations as well as making her own work.
Her recent collaborations include: Aids Follies a contemporary opera/ lecture/ revue -Sophiensaele/ Berlin & Stuttgart as a singer & performer. She wrote the music of the Butoh dance solo show of Yuko Kaseki: W!O!man MADe -Dock 11, Berlin
and the theatre play Will you come with me? (Hakan Savas Mican) Gorki Theatre, Berlin She acted in Fuck Me I love You (LeinzLieberman) English Theatre Berlin. and went on tour in, South Africa with Social Muscle Club as a performer and singer musician.
Her own performance work is concerned with notions of identity, our place in society, our spiritual quest and everyday psychosis. Questions, often confrontational, are asked in a brutal, stylised dream like reality. Her vision is raw yet carefully choreographed, holding the emotional body at its core.
Her latest show Black Snow a conceptual solo musical was premiered at Contradança Asta Festival/Portugal-