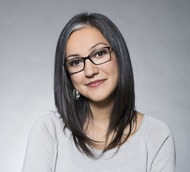 Shivani Saini is the founder of Atelier Culturati, a professional consulting and production agency serving artists and organizations. Its mandate is to support artistic and creative works that positively transform the human condition. Shivani is an accomplished producer and consultant with over 20 years of experience in the art of planning and creative implementation. A graduate of Canada’s prestigious Ryerson University, her expertise has been harnessed by the worlds of television, digital media, the visual and performing arts. Her project répertoire is multidisciplinary and includes award-winning dramatic television, groundbreaking theatre, international visual arts affairs and festivals that cultivate new works. Recently she was the Director of Marketing & Communications for the sold-out world premiere of Making Treaty 7, a history-making live theatrical performance featuring over 20 First Nations and non-Aboriginal artists. Her recent producing credits include seasons 1, 2 & 3 of the award-winning dramatic television series Blackstone, where she took on the roles of Associate Producer, Business Affairs and Digital Media Producer.