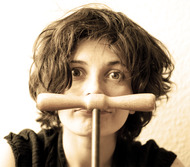 Elya May was born in Russia in 1977. In 2001 she immigrated to Australia at the age of thirteen. In Australia Elya studied art in Monash University and VCA. She was part in number of exhibitions,' and had her first solo show in 'La Trobe Valley Gallery'. She also won a University prize 'Fields of Vision' as well as receiving prestigious 'Pratt Foundation Scholarship', while at VCA. Since 2008 she lives and works in Berlin, Germany. People and their stories, feelings, dreams and visions form basis for Elya's work. Majorly a painter earlier, she now works also with video and digital media, as well as installation and performance.