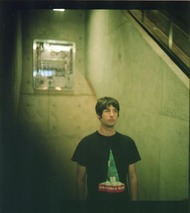 I'm a one-man solo elecrronic pop project called Digits. I'm originally from Toronto, and lived in London for a few months before settling in Berlin. I've released a few albums, and also have a super-slow R&B side project called Bad Passion. I'm looking for a new place to live with like-minded people. If you hear of anything reasonably priced in Neukoln or Kreuzberg let me know.