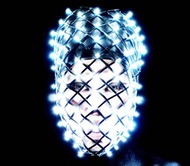 Andreia Splisgar is at once a performer, a narrative artist, a photographer, a filmmaker, a writer and a storyteller. She inhabits these roles interchangeably or switches personas in order to play different characters, fictions and rituals. Her work usually consists in a combination of these Medias and arts. The tales, figures and creatures developed by her are often embossed from the traditions of fantastic film and surrealistic literature. The intense quarrel with the different states of physical and psychological identities and metamorphoses transmits Splisgar into visionary dream pictures that move her characters into material and psychological states of emergency. In this case, the interlocking from sound, word and picture plays an exceptional role. Since 2000 Andrea Splisgar lives and works mainly in Berlin. In 2005 she created the label DER MONDÄNE TIGER, under which pseudonym she develops various art projects and artistic cooperation’s. In 2011 she opened a new sanctuary of the arts and awareness in Berlin that gives space to artists and activists that are considering a certain philosophy of life as the ideal of creative co – existence and welcome a vivid personal exchange of Zeitgeist.