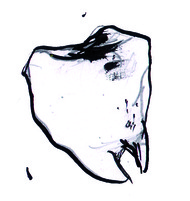 My name is Eugenia Monti, Darkam is the pseudonym I use as an artist.
I was born in San Marino in 1985. I graduated at “I.S.A institute” in Urbino, where I studied drawing and animation. There I discovered my passion for comics and illustrated books.
After my graduation I enrolled at the University of Fine Arts in Bologna, Italy, where I studied comic and illustration.
In 2006 I attended the Fine Art University of Barcelona for one year, thanks to the Erasmus project. Back in Italy I graduated in 2009.
While studing I participated and won several awards, including Blog & Nuvole in 2009, the comic category of the Iceberg award 2006, followed by the publication of my comic story on Inguine Mah!gazine
In 2010 I moved to Berlin, where I attended an internship at the gallery XLab Corrosive Art Farm.
Currently I work as free lance comic designer and illustrator and I’m working on a comic book that will be published by the italian Becco Giallo.