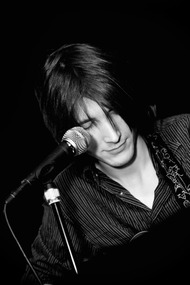 Chris Glen is a musician/song-writer from the North-East of Scotland.
During almost 10 years of writing and performing live, Chris has developed a style of poetic lyricism, “angelic” vocal melody and innovative guitar technique. He has toured Scotland, Germany and recently returned from performing in the United States.
Chris performs solo and with violinist Jamie Ross (www.jamieross.de) and is currently recording his début album.
In 2011 he co-founded Neukoelln’s weekly, “Buzz Club”, which has been running successfully now for over a year and in August, “The Fish Bowl”, which has quickly become the biggest regular live music and English-language comedy
night, in Berlin.