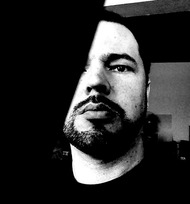 Born in Cape Town, South Africa, Carl Albrecht has been residing in Berlin since 2001, working as a 3D animator, producing music and painting. For the past 20 years, Carl has been focussed on cultivating continuity in his work, be it fine arts, music or animation. Last year, he released his first 3D short, “Jumper” which he had written, animated, and directed at the production company m box Bewegtbild GmbH. 3 years in the making, Carl plans to exhibit a new series of 5 paintings this year, titled “Crisis”.