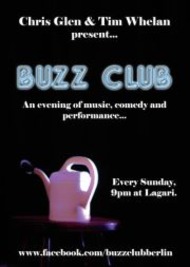 We've played host to an Italian funk band, a Finnish a cappella group, touring pro comics from Australia, Canada, Holland, plus the pick of the Berlin expat comedy and music scenes, every Sunday for the last 2 years.

Based at Lagari, Pflügerstrasse 19; there's often food to complement the performances and we pride ourselves on a welcoming atmosphere for performers, from those taking their first tentative forays into a new genre or old stagers ripping up a classic tune or killing it over 10 minutes of comedy gold.

Just get in touch with us via facebook www.facebook.com/buzzcluberlin or email: tim.jam.whelan@gmail.com if you're interested in performing at a future event.