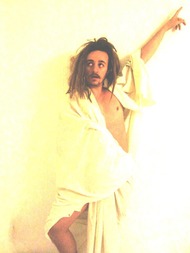 BillyonAir was born in a small village of Greece , Athens. Since he was 0,6 years old , aliens from Andromeda saw his big talent in almost everything he did and stole him from his parents.His first years in Andromeda was playing like all normal alien in his neighborhood. After the year of 18 he started studding nuclear hydraulic , with master in pop culture science, and music copy-pasting technique.
In the age of 45 he discovered his talent in music and especially in the good music. He started playing in many super hyper galactic gigs around the universe , except planet earth.
In the age of 57 he was rejected to play in a gig in Earth because his music was to futuristic for the people there.
but.... ..As all big personalities like him he never give up.He always wanted to play in a gig in Planet Earth.
. After wining the Andromeda music contest (31th )in 2011 he decided to take the first spacecraft to earth. Since then he is hiding somewhere in Berlin. If you want to listen to some music from the future catch him up in his upcoming gigs.