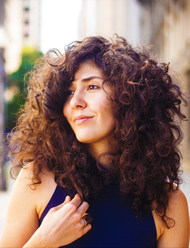 I work in different sections of cinema and television since I graduated in Media & Communication Studies in 2006.
I have acted in many short movies and in one feature film, besides playing small roles on television.
In the last two years I have worked mainly as Director's assistant and producer in different TV series in Brazil, where I come from.
I just finished the production of a traveling TV show around Asia and I am currently editing a few of the episodes. During this time my intention is to find work in Berlin and stay.