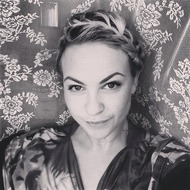 Originally from Katowice, Poland, I was six years old when my family migrated to Kassel, Germany after the Fall of the Berlin Wall. Being 200 km from Frankfurt, I enrolled in school at the Ecole des Beaux Arts, in a city reknown for its documented exibitions.
In 2006 I headed towards the German capital to pursue my second passion: fashion (wuerde mehr Sinn machen, wenn du erstmal deine erste Leidenschaft nennen wuerdest). I studied fashion design at the Lette-Verein in Berlin. I acquired my degree (was fuer einer?) in July 2009, ending those three years with the "Mercedes-Benz Fashion Week Berlin". I filled my time in Berlin with various experiences in which I could link my love for painting and drawing to fashion. I sold my paintings, worked on commission for individuals and in 2008 I participated in a project called Metropolis Puma Dassler in designing and manufacturing models.
That same year I worked with the privately-owned German TV company Sat.1 Media AG for a TV movie using my sketches, various illustrations and my experience in fashion. In 2009, for the Global Campaign Against Hunger, I created and made clothes for the world exhibition "Weltgewänder". My ambition grew and I felt the urge to participate in the project "World Place Europe". My idea was to have a professional experience abroad.
From September 2009 to January 2010 I worked in Lyon, France at Style Costume, where I drew and designed costumes. I fell in love with France and decided to study longer. I learned more about art, literature, science and design and didn't want to be stuck in a superficial world. During my studies I worked in the Museum of Modern Art in Saint-Etienne and I worked for Art Director Christo B in Lyon.
Finally various meetings led me to take up residence in France for over three years, and my very first exhibition was in Lyon in 2012. I graduated in Fine Arts and then returned to Berlin in the summer of 2012 where I worked as a Junior Operations Manager for Zalando-Lounge. This move had nothing to do with art or fashion, it was where I worked to fulfill my passion. I enjoyed this diversity and contrast as it made the time more precious and gave me the freedom to spend the time on illustrations. In a few months I will turn 30 and the biggest gift for me will be to have another exhibition in April 2014. My very first exhibition in Berlin. I cannot wait!