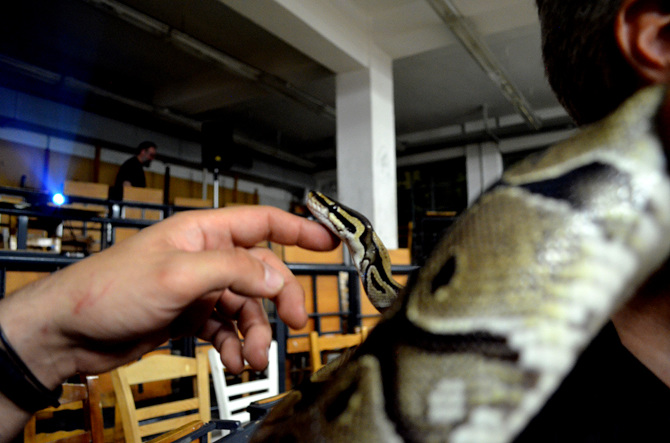 A tribute to west balkan socialism, Greece as a utopian destination and the archetypical paradise

In this performance I started eating an apple through a microphone whilst being invisible. Hidden in the dark side of an amphitheatre, I was simultaneously projecting on the wall two you tube videos; Enver Hohxa venerated, while visiting Gjirokastra and the 2004 Athens violent riots between Albanians and Greeks, due to the victory of the Albanian national football team against the Greek one.
As the audience was accommodated in the stage, a snake trainer appeared with a python wrapped around his neck. He performed a speech on pythons geographic range, diet, habitats, thermoregulation and reproduction.
He initiated his narration by mentioning that:
"Most members of this family are ambush predators, in that they typically remain motionless in a camouflaged position, and then strike suddenly at passing prey. They will generally not attack humans unless startled or provoked, although females protecting their eggs can be aggressive. Reports of attacks on human beings were once more common in South and Southeast Asia, but are now quite rare".
Short after the trainer’s explanatory talk, there was a discussion with the audience resulting into a tactile and tender approach between the reptile and the spectators.