This project tells of a piece of world whose roots lie in my childhood spent in Sicily, the place where I was born. It’s about one of the most precarious categories of workers who try to survive every day by making a living without certainty of tomorrow. They are street vendors, farm hands, smiths, and other small artisans and workers who still represent an important working class, particularly in South Italy, that is largely affected by the current crisis and in general by the globalisation.

But this series is above all a tribute to the most common means of transport of these workers, a characteristic vehicle that is part of the Italian tradition, and that is slowly disappearing: the “Ape Piaggio” (Bee). The Bee is a three-wheeled cheap, minimal and versatile means. Basically it is a motorcycle equipped with a small cabin and a loading platform to be suitable for all kinds of small transports. My childhood memories are still inhabited by the images of these small vehicles buzzing all around the streets of Sicilian cities and villages.

Using a language in between documentary and portraiture, through a series of triptychs I try to evocatively depict the special relationship that establishes between the Bees and their owners, a relationship that often lasts a lifetime.
The images of the polyhedral cabins indirectly tell the stories of their owners, even more than the portraits themselves do. Faded, rusted and lived up to be literally consumed, the Bees represent the fascinating symbol of a working class that still resists and fights for its own survival.

The project, entirely done on film with a 6x6 medium format camera, is still on-going and hopefully will end up with a book. 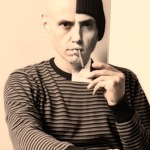