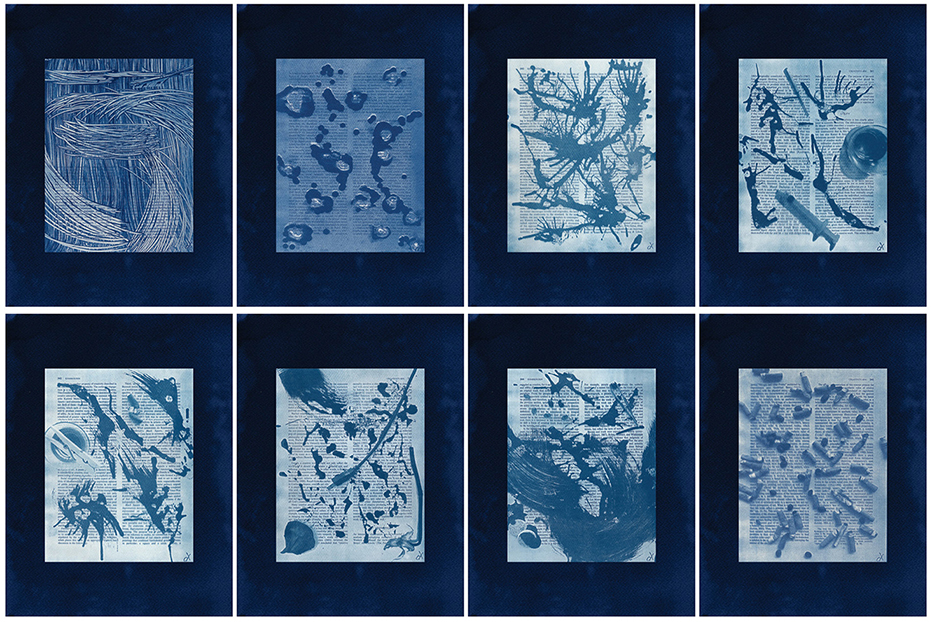 (7 cyanotype 31x41cm photograms)
After 20 years of scientific research in creativity, I have realized that instrumental capacities of contemporary psychology cannot provide an in-depth comprehension of the nature of creative faculty and creative process. Artistic contemplation, on the other hand, due to its metaphorical manner of expression gives us an insight into these issues. Science appeals to our conscious reasoning. Art taps into the unconscious. Due to distinct methodological approaches, art and science are being dichotomized in the contemporary world. I intend to open a dialog between art and science to bridge this gap and merge formal language of science and metaphorical language of art into a coherent method of creative expression. In this series, I juxtapose excerpts from my scientific journal article entitled “Creativity.4in1” and arbitrarily straw blown inkblots and found objects. Both deal with the construct of creativity. The former presents a four-dimensional model of creativity that relies on my logical conscious reasoning. The latter presents an unconscious process that relies on my aesthetic perception. In a way, I plunge into the constrained, rational, scientific, and at the same time, I destroy the constructions of my conscious mind with an act of spontaneity and chaos. I use cyanotype technique to merge these two approaches into a coherent work emphasizing transcendent nature of human creativity.