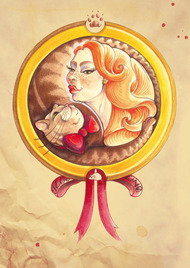 Xenia Pankowa was born in Potsdam, former East Germany to a family of musicians. Following her parents in their musical travels, she spent her early childhood in Russia, Latvia, East Germany and Sweden. Although the excitement of travel didn't stay in her memories, the considerable collection of watercolors and colored pencils she owned at the time did.
After the reunification of Germany her early childhood proceeded to Stralsund, a city of the Hanseatic League on the Baltic coast. Later Xenia moved to Hamburg where she attended the College of Applied Sciences, starting off studying Costume Design but, admittedly missing her colored pencils, decided to change her major to Illustration. She successfully graduated in 2012.
While studying at college, the alter ego Uzzolino came to life, and since 2010 Xenia resides with her in Berlin, sharing an apartment with colored pencils, paint brushes, two cats named ‘Siggy’ and ‘Yoko’ and, if she hasn’t fallen asleep on her drafting table, she still might be drawing right now...

Feel free to email me with any questions, opportunities, commissions and ideas.