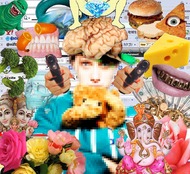 Francesca Del Bono was born 1985 in northern Italy. Influences of her native environment clearly show in her work through her passion for the grand masters of italian design and for vintage esthetics. After studying at the Fine Arts Academy in Brescia she moved to Berlin, were she enjoyed the constant inspiration provided by the city's urban environment and the possibility to freely pursue her playful spirits. After gaining experience in the local independent fashion scene as a freelance graphic designer, she joined forces with two of her best friends to start off a project involving visual communication, social networking and DIY craftsmanship as means for positive social change.
In her visual compositions, which are emblematic of the ecleptic array of esthetic influences to be found on the Internet – from trashy to sophisticated, from splatter to sublime – she tries to induce an element of surprise and novelty in the dulled observer. When trying to shock the watcher, it's never for the shock's own sake, but to wake him up and force him to reflect – it's a call to action. Besides, she has fun in scaring or shocking people.