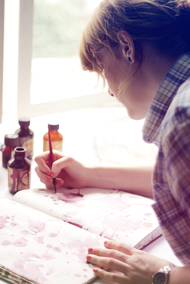 "She developed an indiviual style through her working process and technique, which is based on the psychology of human perception. Her distinct way of painting and drawing is based on what her imagination allows her to see in tea, juice and coffee splotches. The way Angela works is based on “apophenia”. That´s a term used by psychologists to describe the pursuit of the human mind to construct meaning, order and forms even from chaotic structures - just like seeing faces in the clouds.First she prepares sheets of paper with splotches of coffee, several kinds of tea or juice to create those patterns. Those form the visual origin from which she creates her drawings. Subsequently she elaborates an individual interpretation of weird looking characters and sceneries her imagination “detects” in the coincidental blurs. The motifs she finds in the visually stimulant material are extracted from the patterns by drawing with colored ink. Though they are carefully worked out in detail her pictures provide a wide range of interpretation, different approaches and scope to “see more”. "