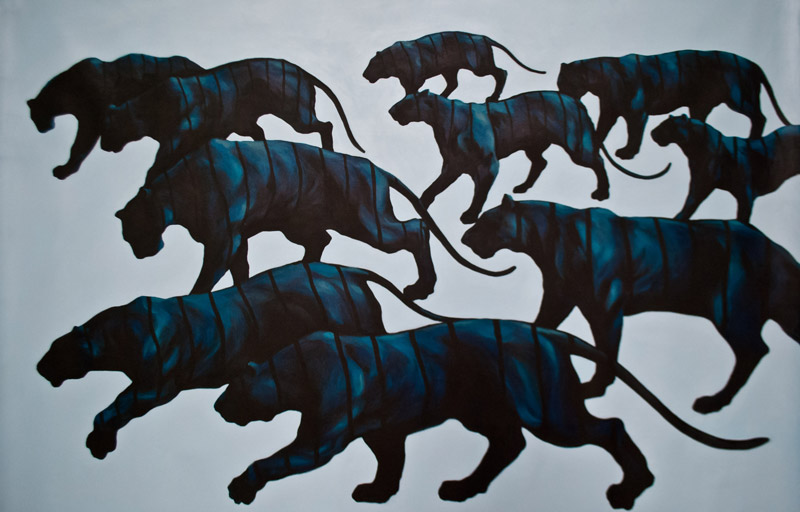 After two successful group shows with Argentinian based artist Franco Fasoli – JAZ, BC Gallery continuous the collaboration with a solo show under the title „VINCULO“. From June 6th to July 26th visitors will be able to experience his paintings which are defined by the tensions of ambivalence. The works are specifically made to be arranged in the gallery space and therefore fill the atmosphere with the spirit of his vision.

Duration of the exhibition:
June 6th to July 26th

Opening hours:
Tuesday to Saturday, 1 pm to 6 pm and by appointment

About the Show
As can be derived by the title which refers to the spanish word “vínculo” (= bond) the show deals with connections, contradictions and contrasts full of tension that shall not only be shown through the paintings but also through the gallery space and how it interacts with the art. The ambiguity that serves the characters of Franco Fasoli - JAZ‘s work reflects issues of South American society like social confrontations that occur in various contexts. At the same time it also shows a deeper state of the mind that inheres human like identity confrontations that go along with our fears and the permanent combat we have being inevitably connected to them. It is the artist‘s concern to distinguish a double faced reality which he demonstrates through his creatures that often appear mirrored or as disguised human fighters that remind of lucha-libre-wrestling and therefore build a connection to his roots. Also in his choice of colors JAZ creates a dark counterpart to his recently exposed work which appeared in a much brighter color range. The paintings, which are specifically made for the space, will be arranged in the gallery to underline the artist‘s vision of ambiguity and create a tension of confrontation between the upper and lower floor.

About the Artist
Franco Fasoli – JAZ, who‘s career started as a graffiti writer in the streets of Buenos Aires
in the mid 90‘s has over the years evolved his designs from a letter based to a more
complex and figurative style which is determined a lot by his unique way of mixing
colors. Inspired by his work in scenography, JAZ started experimenting with several
unusual materials such as asphaltic paint, petrol, tar and glue which allowed him to
create his very own technique for mural painting that results in a watercolor-like
luminescent but transparent effect. This has as of yet never been seen in the urban art
scene and beautifully displays the merge between graffiti and fine arts. Through motives
like lucha-libre-style wrestling or hybrid creatures like minotaurs that many times
occur mirrored or as part of a mass he is dealing with Argentinian culture and the
issues that come with it. Usually they are locked in combat and attest to metaphoric
violence or the bipolarity of the human mind. During the last decade his work has been
exposed extensively around the world, being part of Art Basel Miami, G40 Richmond,
Living Walls Atlanta, Latir Latino Lima, Open Walls Baltimore, Mamutt México City and
Meeting of Styles Buenos Aires. Also on influential online media and art platforms JAZ‘s
work is highly represented. He is listed under the ‚50 greatest street artists right now‘
in an article by the well-known Complex Magazine in 2012 and even more recently
in May 2014 The Huffington Post put Franco Fasoli – JAZ at the top of the list in an
article named ‚25 Street Artists From Around The World That Are Shaking Up Public Art‘.