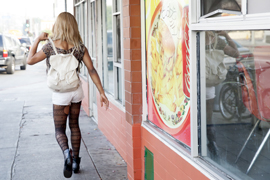 an exclusive Berlin premiere of

"Tangerine jumps off the screen and wows you like nobody's business. A visually innovative knockout that grabs you from the first frame."
– Rolling Stone

Shot entirely on an iPhone 5s, this instant cult classic was a break-out hit at Sundance this year and will be making its way to Berlin after several international film festivals.

We're incredibly excited to welcome the film's acclaimed director, Sean Baker, to Berlin for a Q&A after the film (with thanks to our hotel sponsor, Hotel Zoo http://www.hotelzoo.de/en/)

When transgender working girl Sin-Dee hears that her pimp boyfriend has been cheating, she drags best friend Alexandra on a wild pimp chase from donut shops to drug dens down Santa Monica Boulevard.

How To Be Unstoppable: Sean Baker and the Digital Filmmaking Revolution – IndieWire
http://www.indiewire.com/article/how-to-be-unstoppable-sean-baker-and-the-digital-filmmaking-revolution-20150710

WITH THANKS TO OUR SPONSORS & PARTNERS