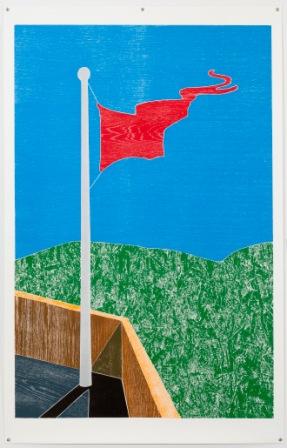 Schütte is widely considered one of the most important sculptors in Germany. In addition to sculpture, his oeuvre also includes numerous prints, and it is these that form the focus of this exhibition, with over 200 works on paper on display, juxtaposed by several sculptures. The timespan of works featured ranges from the 1980s to the present day. Thomas Olbricht has been a constant collector of Schütte’s art since 1999. He recently presented the artist’s ‘Ganz grosse Geister’ (Big Spirits, 1998–2004) as a permanent loan to the city of Essen, where it is currently installed behind the philharmonic hall.

The Olbricht Collection boasts virtually every print Schütte has ever made, including for example his series ‘Nine Woodcuts’ (2011), previously only ever displayed in New York and Paris, ‘Silly Lilies’ (1995), and ‘Fleurs pour M. Duchamp’ (2002), all of which will feature in the Berlin show. The exhibition will also include several other works on paper on architectural themes dating from the 80s, as well as watercolours from the mid-90s. Sculptures on display will include Schütte’s edition ‘Man in Mud’ (1983/1994), ‘Double Head’ (1993), and a shelf with 12 ceramic sketches and the sculptures ‘Steel Woman I’ and ‘Bronze Woman III’ (both 1998) from his ‘Women’ series. The most recent acquisition on show will be the bronze head ‘Third Sister’ from this year.

All works powerfully reflect Schütte’s formal ingenuity and artistic independence, his joy of materiality, and his passion of working with his hands in an age of all things digital. In an interview with Ulrich Loock, Thomas Schütte said the following of his work: ‘You’ve got to just make it, with your hands and body. Your body will tell you when it’s good. Just three seconds of little video images, a darkened room, and the smell of musty carpet and I have to get out… I just get up and go because the virtual does not interest me at all. A scratch in a copperplate, a fingerprint in clay, or burnt polystyrene: that’s what I like. Precisely the kind of things that were forbidden in our college days: the artist’s mark, finger, body, something individual.’ (Frieze d/e no. 8, February/March 2013)

Accompanying the exhibition is an extensive programme of events, including expert talks, readings, workshops for children and young people, and guided tours.