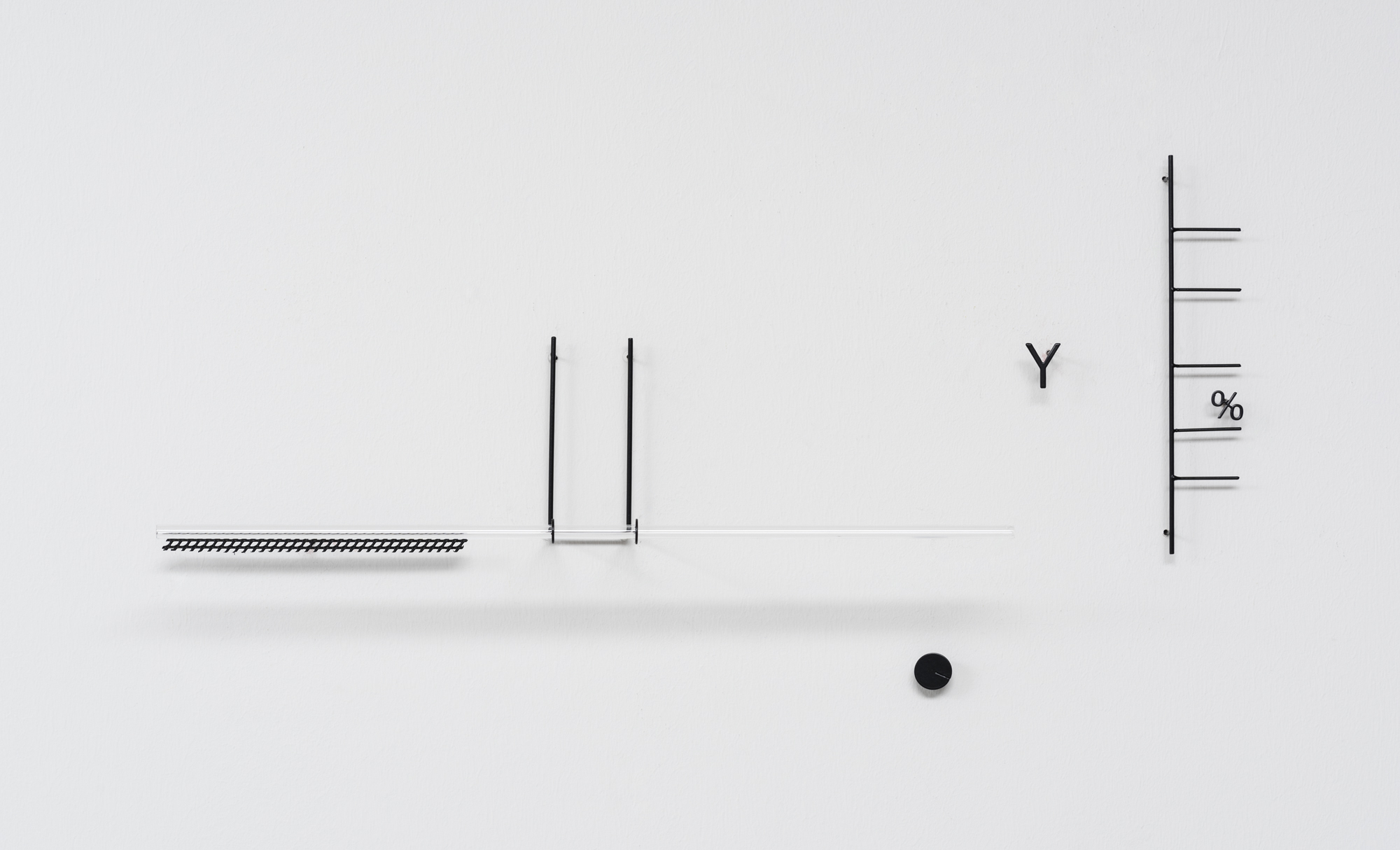 Driven by an ongoing interest in redefining the concept of sculpture, Kudlicka seeks to overcome the prevalent connotations of the art form as solidified instances by expanding her practice into the field of sculpture as a form of spatial writing. For the exhibition Elements of Peaceful Engagement, sculpture as a node of communication that actively negotiates the processes of the sculptures’ coming-into-being and their relation to space, is extended further and becomes embedded in a discussion revolving around the protocols and strategic systems intrinsically connected to office and workspace standards and how these, in turn, come to inform and structure human decision-making processes.

The approach the artist has to the workspace is intrinsically connected to “Modern Efficiency Desk” by F.W. Taylor, who introduced the notion that having large open floorplans with desks facing supervisors influenced productivity. Perhaps it is a coincidence that Taylor began developing his theory in the steel industries, the same material chosen by Kudlicka, (together with glass), to bring his concept into the space of ŻAK | BRANICKA. From a technical standpoint, both glass and steel are materials that do not accommodate each other. Their cold inflexibility makes working with them an experimental challenge with extremes. Sometimes against any logic, the glass becomes the catalyst holding an entire steel structure on its feet. The artist uses these elements as counterpoints in sculpture and when turned into language, an essential element of Kudlicka’s artistic approach – they carry on a dialogue about strategy, as a high level plan to achieve goals under conditions of uncertainty.

Kudlicka continues her interest in the various parameters of language structures, among protocols, classifications, systems of methods, concepts revolving around norms, standards, and strategies. The workspace is approached as an architectural and design phenomenon which sprouts the need for flexibility to work both individually and collectively on shapes of thoughts. These sets of rules and instruments explored as coping mechanisms for structuring daily routines, offer insight into the concept of a workplace, whilst simultaneously influencing and informing an atmosphere in which physical and mental movements generate an interchange in the decision-making process. Notions like protocol, strategy, norm and standard play a fundamental role in the process of establishing a communication trajectory. However, Kudlicka does not employ her work to establish a new norm or standard for a workspace, but rather takes the subject matter of structuring principles to question how radically they influence the effectiveness of communication processes in a workspace environment.

Based on the text by Niekolaas Johannes Lekkerkerk: “Elements of Peaceful Engagement”

Marlena Kudlicka (b.1973 in Poland) lives and works in Berlin. Her works have been exhibited in international institutions such as the MWM in Wroclaw (2016), the Skulpturenmuseum Glaskasten in Marl (2016), the Kunstmuseum Bochum (2016), the Museum of Contemporary Art in Zagreb (2016), the Zacheta National Gallery in Warsaw (2015), the Museum of Modern Art Lodz (2014) or the CGAC in Santiago de Compostela (2012). She also had residencies at the Cité Internationale des Arts in Paris, the Schloss Solitude Akademie in Stuttgart and the International Residency Program Location One in New York, among others.