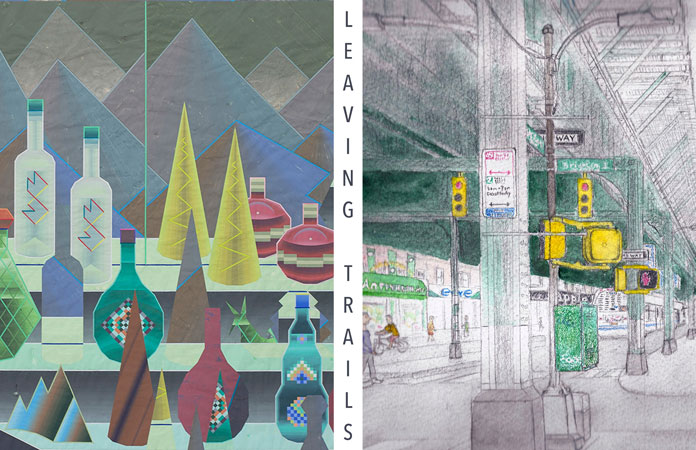 HilbertRaum is pleased to present Leaving Trails, a two-person show by John Hodany and Witte Wartena. Both artists have spent the last fifteen years working between several countries and cities. They often work on paper, with drawing forming the core of their practice. This has allowed them to be mobile, often starting a work in one country and finishing in another. They take inspiration from their life experiences and the journeys they make through interiors, still lifes and land/cityscapes. The images appear to be simple and direct, yet on closer inspection, there are details, multiple layers, and meanings to discover.  Themes or locations are revisited, sometimes years later. Images refer to each other and generate a continuity of new meanings, showing the traces of change in the environment, but also the development of the artists themselves.

The depiction of places and objects in a state of transition plays an important role in John Hodany’s work. These transitory states usually stem from the encounter of the natural world with the manmade. Through invented techniques, using a development of patterns, sequences or cut apart and rearranged sections within the paintings, Hodany’s work creates the effect of a continuum and suggests animation within a still image. Ghostlike afterimages and repetitions appear on the surface of the paintings as if they were memories or anticipations of past or future. In this spirit, the notion of movement, the underlying patterns and the marriage of materials are always in service of the idea that things are ever-changing, that beings, objects, environments, micro-environments are in constant play.

As an ‘embedded reporter’, Witte Wartena records his daily life. The detailed registration of his memories form an important aspect of his work. His drawings function like a diary or personal photo album. He tries to break free from the rules and customs that he has imposed on himself, which have limited him in the past. In some drawings he portrays himself sitting in front of a blank sheet, a Tabula rasa. Around him on his desk, books, magazines, flyers, a MacBook and Wartena’s earlier works can be seen, all of which were previously depicted in other drawings. In 2009, Wartena made a series of drawings from photos he took in Brooklyn. Last year, after visiting these locations again, he made new versions of these works.