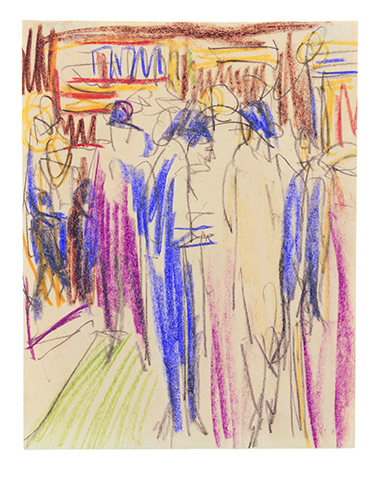 Ernst Ludwig Kirchner, Gerhard Richter and Jonas Burgert: me Collectors Room Berlin creates dedicated spaces for three important German artists of three generations. The focus of the exhibited works is man as an artistic motif. The exhibition with works of the Olbricht Collection will open on the occasion of Berlin Art Week on 11 September 2019.

Since his early youth, Thomas Olbricht has been interested in the graphic works of the German expressionists, focusing early on the artists’ group ‘Die Brücke’ and on Ernst Ludwig Kirchner in particular. Today the Olbricht Collection, with its nudes and portraits as well as Berlin street scenes, brings together two important groups of motifs which can be read as sociopolitical testimonies of their era: the portraits from Kirchner’s time in Dresden reflect the idyll of an earthly Arcadia, which the artists created for themselves between 1909 and 1911 at the Moritzburg Lakes – while the Berlin street scenes, executed in rapid strokes after Kirchner’s move to Berlin in 1911, have become symbols of the German capital prior to the outset of the First World War. Kirchner’s famous shop window scenes with the cocottes on Kurfürstendamm can be symbolically interpreted as a dance on the volcano.

Gerhard Richter, one of the best-known contemporary German artists, was born in 1932, only a few years before Kirchner’s death. He is an important pillar of the Olbricht Collection, the only institution that owns Richter’s editions in their entirety and can thus depict his oeuvre over a period of five decades. In addition to Richter’s abstract tapestries, the collection’s focus is also on human images – one of the central themes of Richter’s editioned works since the 1960s. Both photographs from his family photo album and press photos of famous personalities serve as models for Richter’s exploration of artistic techniques. At the same time, he draws on some of his painted portraits and portraits, which he subsequently reproduces as prints or photographs. A prominent example of this approach are Richter’s ‘48 Portraits’, which are shown as an edition in the me Collectors Room. The painterly models were shown in 1972 in the German Pavilion at the Venice Biennale.

In addition to established artists such as Ernst Ludwig Kirchner and Gerhard Richter, Thomas Olbricht also continues to be enthusiastic about young art. Fifteen years ago, for instance, he happened upon the mysterious scenes of Jonas Burgert (born in Berlin in 1969), populated by enigmatic figures, and has accompanied his career as a collector ever since. In their directness and immediacy, Burgert’s monumental paintings and sculptures captivate the viewer. Portraits of individuals lost in thought remain inexplicable and the stories behind the figures nebulous; at the same time, the artist invokes the entire range of human sensations through archaic symbols, unreal distorted perspectives and a bright palette of colours. Burgert’s works do not elude sociopolitical classification, nor do they test different techniques; Burgert rather develops human sensations and sensibilities. The genesis of his oeuvre, and thus also of his figures, can be impressively traced directly from the studio – thanks to the artist’s latest works.