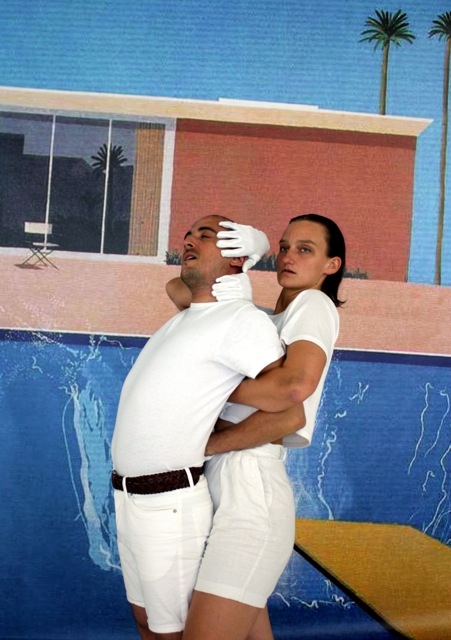 In all inclusive Julian Weber studied with a group of five dancers parallels and paradoxes of a manic-obsessive culture industry and an orchestrated-healing holiday resort. The performative potential of the catastrophic acts as a foil to scrutinize conventions and hierarchies in institutional spaces in the context of fine and performing arts. Julian Weber deconstructs in this choreography strategies of image production including their logistics: practical procedures bounces sensual corporeality. The collision of images, bodies and materiality generates ambiguously states between slow motion and fast action control.
Floods of images from the new media take on iconic works of modern art and gets confronted as oversized souvenirs with compositional methods from the art and dance history.

The dancers move through scenes where hierarchies and power relations are inscribed. They are even the image and the exhibited object, so that they begin again excessively emancipate themselves. In the interplay between fact and fiction, of consideration and contemplative objects the dancers explore the questions to construct weights in a milieu of art consumption. In a hybrid setting between a choreographed scenography, a museum-like space and a resort the audience itself become part of the multiple image scene.

Julian Weber is a choreographer/dancer and visual artist. He studied at HBK Brunswick and Academy of Arts Vienna. 2013 he graduated in dance and choreography at HZT, Berlin. Since then he works intensively on spaces of interaction involving body, material and movement. In the last years he took part in several group-exhibitions, had different residences abroad and developed performances and exhibitions. He works with artists like Meg Stuart, Boris Charmatz and Tino Sehgal and creates his own work on the intersection of visual and performance art.