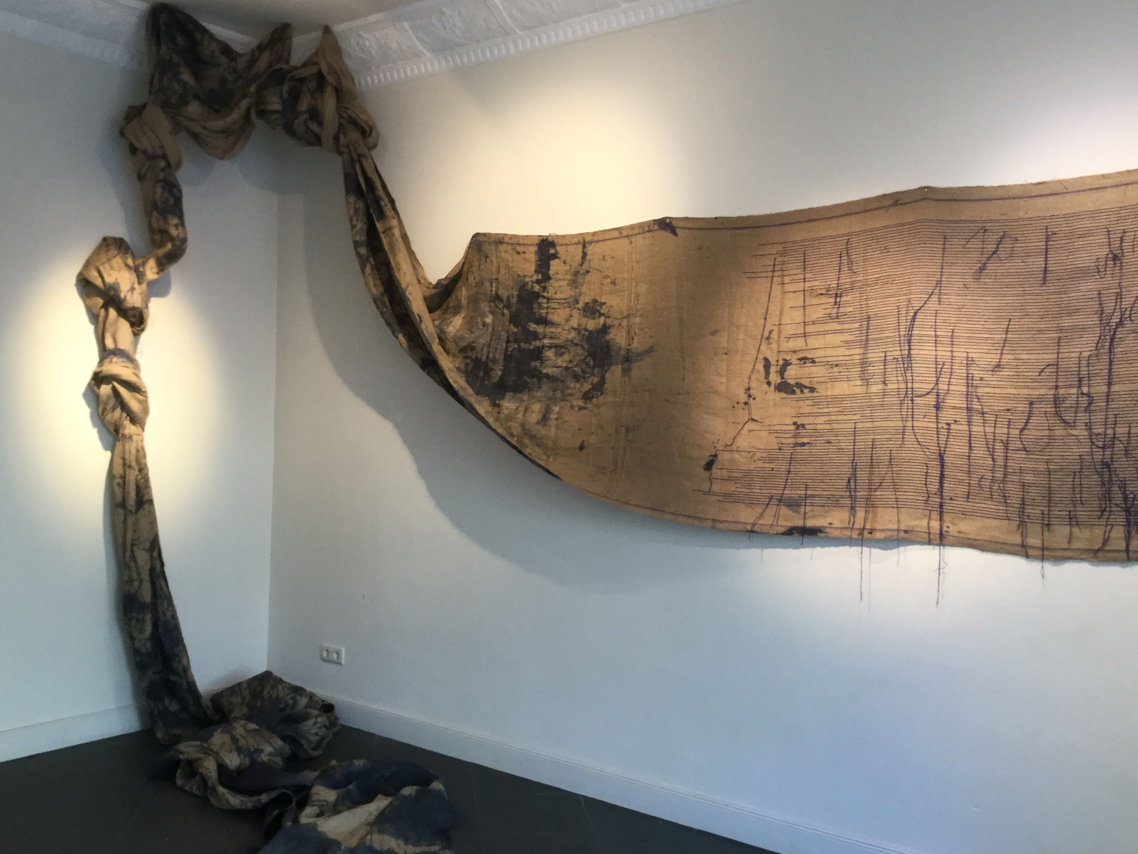 Indigo First, Famine Later
Meenakshi Nihalani
Curated by Snehal Tambulwadikar, Mumbai
We are as forlorn as children lost in the woods. When you stand in front
of me and look at me, what do you know of the griefs that are in me and what do
I know of yours?
~ Franz Kafka
The ‘experience’ comes from an enquiry initiated by our collective efforts to understand ‘existence’
and its parody, and Death makes it essential to validate the meaning of human life. The structure
to validate and attain equilibrium with this parody fundamentally faces the ‘absurdism’. The
absurd arises from the inquiry into the meaning of life, but what goes beyond the absurd? If and
when death is ignored or denied, an Aporia over absurd forbids every ounce of rationality in humane.
This aporia is characteristic of the British colonisation of India where life and death of citizens was
entirely repudiated.
Indigo manufacturing and cultivation in the Indian sub-continent under the British is simultaneously
known yet unknown as the world is largely unaware of the extent of inhumane conditions
during this time. The slow and systematic realisation of British goals over a period of almost two
centuries led to banishment of identity of villages together. What is absurd in the indigo revolution
is the complete denial of its existence by the world. While the atrocities of the Vietnam War and the
Hiroshima-Nagasaki bombing are recognised and condemned, the suffering of the indigo farmers
and tenants goes unnoticed. Although the Bengal and Bihar provinces combine just a small portion
of the total Indian population, they suffered two of the five most perilous famines, leading to
almost 17 million deaths in total.

Profits of Indigo cultivation conquered the minds of Colonisers while also supporting the wars. The
obtuse decisions of the aristocracy and the government deprived the farmers of their rights to food
and life by causing the famines. The food that would have saved many lives in 1943 was stored as
backup for the British army during the World War.

Today we require the recognition of what happened and the cultural devastation that it called.
Meenakshi’s works dwell into the realities of indigo desolation and what it would mean to the
contemporary Indian. Her thought process explores of reasons behind the complete denial of
these events of two centuries. Working largely in textile with natural indigo dye, her works investigate
the changing topography and culture impacted by indigo cultivation. She enforces the
absence of the human body in her works, mirroring the erasure of both the farmers and their
oppression over the past few centuries. Using jute, a typical material of Bengal and Bihar, and soft
blue threads, her works creating both peace and menace. Using the peaceful blue violently is a
parody that illustrates her emphasis on the silent subjugation of Indian lands.

The diplomacy of British and their absolute impairment to existence of others beyond their own
has ongoing ramifications. Haunting is the fact that these devastations have always been seen as
peripheral and would cause further famine by indigo (or any other object of human vanity). The
Indigo Revolution creates a parallel to the absurdities of modern inequalities and the third world
existences, to break the refusal in addressing the underlying anxieties.

UNDER THE MANGO TREE