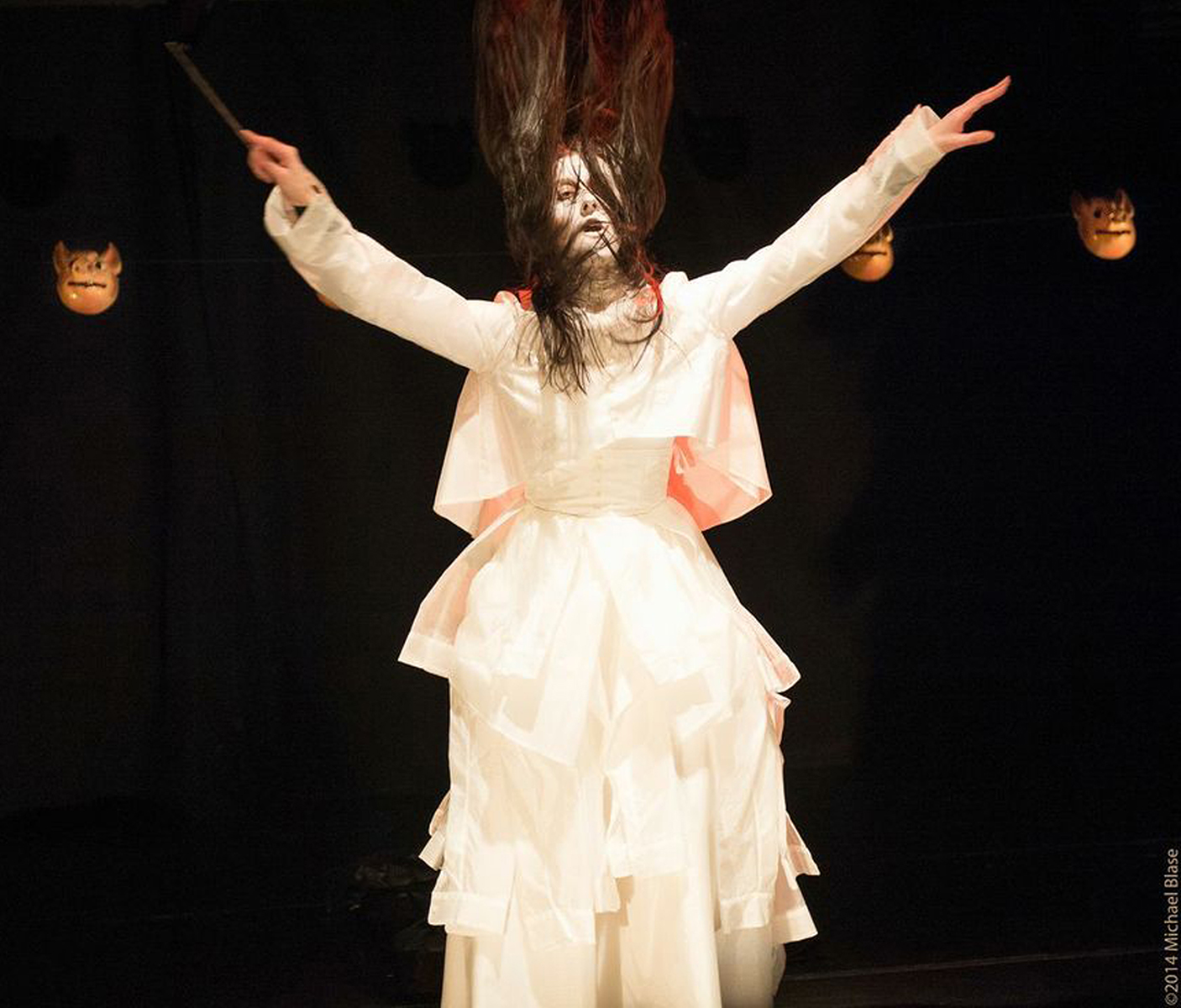 Blue Cliff is a performing arts company located in Denmark and working on the range between Butoh and theater. In “Dancing with Ghosts”, Blue Cliff presents two modern day Butoh artists, Yael Gaathon (DK/ISR) and Vangeline (USA/FR), bringing to the stage two solo pieces with complementary and contradictory styles and atmosphere.
There will be also artist talk both evenings after the performances.

… 4-star performance of BUTOH BEEETHOVEN received critical acclaim at the Edinburgh Fringe Festival 2015 and was dubbed ‘Exquisite…a resplendent piece of performance theatre; a true tour de force, literally a feat of strength, within and without.”

New York butoh star Vangeline conjures ghosts of two passionate giants – founder of butoh Tatsumi Hijikata and composer Ludwig van Beethoven – in her hypnotic, electrifying and award-winning solo performance “Butoh Beethoven”. Vangeline's costume is created by New York designer Todd Thomas (Katy Perry Prismatic Tour).
To create this solo show, Vangeline drew upon the power of Beethoven’s music and the dramatically charged art of conducting (which she studied for four months). There are, she claims, forces at work here that go beyond a typical dance piece: ‘I’m exploring human history in all its beauty and violence. I’ve also learned to always invite spirits into my dance.’

“We are drawn into a world of passionate struggle, huge pain and the glories of composition, of performance, of pouring one’s soul into beauty to combat torment. Butoh followed in the wake of its founders’ harsh experiences during World War Two, while Beethoven fought to continue creating despite despair at his ailments… Vangeline’s exquisite control allows change where there seems no movement, as well as holding distorted shapes, sinking below crushing metaphorical weight and fighting to rise to the heights of glorious accomplishment…” 4-star review by Edinburgh Spotlight

Vangeline is an award-winning Butoh dancer, and choreographer. She is the Founder and Artistic Director of The VangelineTheater Inc, and the New York Butoh Institute. Vangeline Theater is an all-female dance company that is committed to honoring the legacy of the art form while moving butoh forward in the 21st century. Vangeline's work has been heralded in publications such as the New York Times (“captivating”), Los AngelesTimes, (“moves with the clockwork deliberation of a practiced Japanese Butoh artist”) and LA Weekly to name a few. Time OUT Chicago named Vangeline's, "one of the best Dance Visits of 2011."
She is the winner of the 2015 Gibney Dance's Beth Silverman-Yam Social Action Award recognizing excellence in the field of Community Action. Her Butoh work has been commissioned by Atlantic Records’ Grammy award-winning artist SKRILLEX, and is featured in a major motion picture “The Letter” with James Franco and Winona Ryder.
www.vangeline.com

II
By the Fading Light

“By the Fading Light”, holding it’s world premier in Aarhus in June 2016, is a Butoh-theater piece about age and aging. In it Yael Gaathon (DK/ISR) unfolds the inner story of a woman past and present, journeying through memories, fears and acceptance.
Age and aging. Losing our looks and losing our mind. Coping with memories, with regrets, with ghosts of dreams that have died, with fear of death, with letting go.
So much loss, and yet… what do we gain?
Nothing compares with the wisdom of mountains.

Yael Gaathon, based in Aarhus Denmark, is the artistic director of the Butoh company Blue Cliff. She has been working with Butoh for over 20 years choreographing, performing and teaching. She views Butoh as an extreme form of sincerity, both in presence and in creation. It is the soul that dances, revealing itself and sharing intimacy and darkness, joy and weakness.
Yael started her career as a theater actress in Israel and was a member of the internationally acclaimed Itim Theater Ensemble, performing with them world wide at prestigious places such as The Barbican Centre in London, Wiener Festwochen in Vienna and Adelaide festival in Australia. Today Yael Gaathon choreographs, directs, performs and teaches Butoh and theater, working among others with National Theater School (DK) and the Danish Actors Association.
Her appearance on stage was marked as: „… dance with thrilling energy” (The New York Times), “… one of the cast’s 10 remarkable actors”, "Tall, striking Yael Gaathon...radiates serenity in repose" (San Francisco Examiner), "Yael (Gaathon) ... is brilliant" (Information, DK)
www.bluecliff.org

Sponsored by the Danish Arts Foundation, the City of Aarhus, Dansevaerket – Aarhus, Materials for the Arts - NY