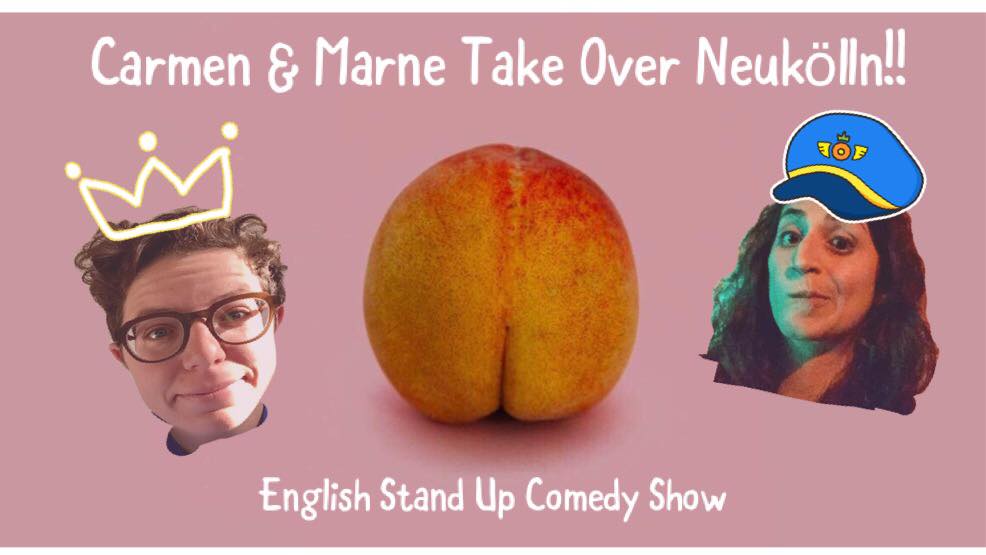 Forget about your hipster hats, funky sneakers and vegan milk!
It’s all hipster old news!
Wanna feel all powerful, even after partying for 3 nights in a row with no club mate while someone sneezed at you on the M41?
Marne and Carmen offer you for one night only: the secret recipe of taking Neukölln down!
It all consists of:
Strong opinions, sassy attitude, cool socks and lots of humour!
Join us for a special night of English Stand Up Comedy!

About the comedians:
Marne Litfin
Drier than the back of your elbow in January, Marne is a comic with roots in Berlin and New York. Marne has performed at the Stockholm Fringe Festival, Folsom Europe, Berlin Burlesque Festival, and is the creator of WITCH HUNT, a showcase for women/non-binary/trans voices in comedy.

Carmen Chraim
Born and raised in Lebanon, she wins over crowds with her high energy presence & rapid-fire anecdotes. Thanks to her Middle Eastern background, passion for hummus, deep experience with corporate Germans and sarcastic political views, she’s often seen as an alternative Arab success story that hasn’t yet been discovered by the media. Carmen used to produce many popular comedy shows in Berlin, but got so tired of trying to decipher Facebook ad algorithms, that she stopped being a producer and found herself hosting the very cool open mic Monday Night Mics every “guess what day?” in Neukölln