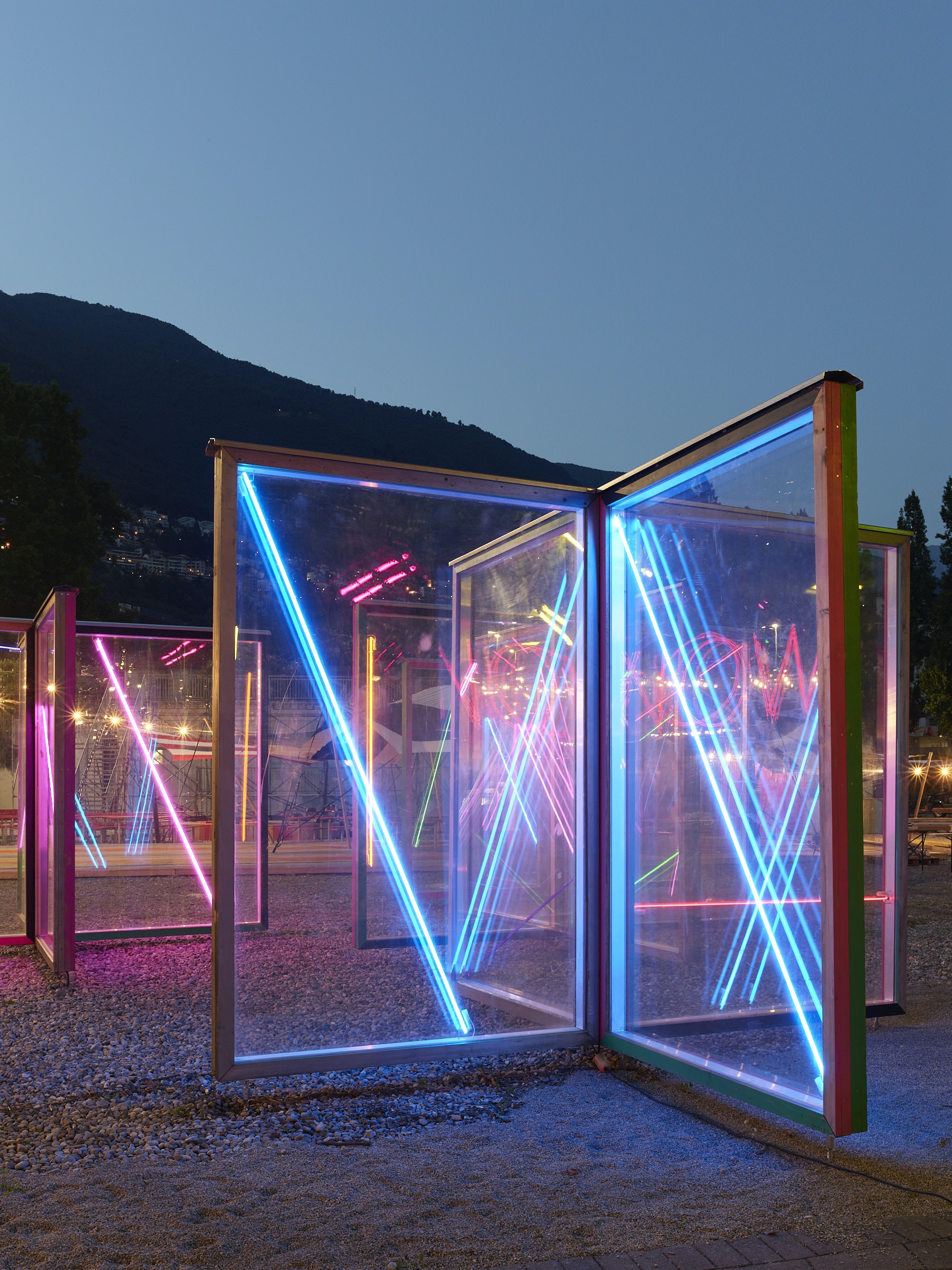 Titled 'Come Together', the playful, multicolored installation takes over the festival’s 100-meter-wide rotunda, bringing together site-specific works by Kerim Seiler spanning various mediums and dimensions. In partnership with la Mobiliare and the Locarno Film Festival, Seiler creates a deeply experiential setting and invites visitors to engage and become part of the artwork, fostering social interaction and cultural exchange.

Pursuing his longstanding collaboration with the Locarno Film Festival and its main partner la Mobiliare, a Swiss insurance firm, contemporary artist Kerim Seiler (b. 1974, Bern, Switzerland) unveils 'Come Togethe'r, a large-scale site-specific installation at the Locarno Rotonda by la Mobiliare, the sociocultural space of the Locarno74 film festival. A colorful spatial composition, the installation brings together a sampling of new works by Seiler, all part of the la Mobiliare collection, as he revisits the notion of space as a boundless canvas – as well as works by contemporary artists Maya Rochat, Julian Charrière and Ekrem Yalcindag. Prompting countless experiences of the space, the 3,000-square-meter rotunda – a large roundabout well known to Locarno’s inhabitants and visitors – acts as the new social hub of the festival, inviting visitors to engage with a playful composition of art, cinema, music, and hospitality spaces reaffirming the importance of social interaction and cultural exchange that lie at the core of the Locarno Film Festival.

As part of the fifth iteration of the Locarno Film Festival’s partnership with la Mobiliare, 'Come Together' is in the immediate vicinity of the festival’s main venue, the PalaCinema and the notorious Piazza Grande – one of the world's largest open-air screening venues seating 8,000 spectators. The multifarious installation of site-specific artistic spaces and artworks is part of Seiler’s Situationist Space Program, an ongoing body of work rooted in the artist’s practice of reappropriation, reiteration, and expansion of past and existing work.

As visitors enter the main circular area, three spaces stand out at its core. The first is an ensemble towered by a vast rectangular tent. Asymmetrically positioned over the space, it converses with a new vibrant 250-square-meter floor painting – a striking assemblage of multicolored wooden boards. Next to it are a wooden bar and circular stage surrounded by Seiler’s 2016 work, Tschutschu, a modular spiral of interlinked tables and benches. Made of wooden boards set on a welded metal structure, it can be assembled and dismantled at will, evoking a whimsical succession of train tracks, hence the name of the piece.

Analogous to the first, the second area exposes yet another new floor painting, though this time in black and white, playfully mirroring the monumental tent covering it. Adjacent to it, a disjointed structure, at once circular and rectangular, constitutes one of the Rotonda by la Mobiliare’s three bar areas. As for the other two, the structure consists of three basic elements to be arranged, and rearranged, freely. Revisiting his Spazio Cinema installation designed for the festival’s 2017 edition, Seiler repurposes the steamed painted wooden panels that constitute it, once again allowing his art to adapt, expand, and relive in various places.

Opposite the entrance as visitors traverse the space is an anarchic arrangement of artistic and social settings. An expansion of Seiler’s 118 minus 11 (2012) installation at the Zurich Hauptbahnhof, 'Tender is the Night' (2020) consists of four wooden 3 x 2-meter split-screen crosses, each containing a unique-size colored neon tube, creating a profoundly contemplative transitional “non-space.” Taking its name from American author F. Scott Fitzgerald’s 1934 novel, it recalls a nightly, near subversive experience of space – and of the mind. A spirited nod to the latter, the 'NEW/NOW' (2017) neon installation is the mantelpiece atop the Rotonda’s bar Bosco. Set on a random timer, the blue and red neon letters flicker from one word to the other, conjuring visitors’ attention to the tension between the now and the new. Calling to the neighboring bosco (forest), they enter in a final visual ricochet with over 100 colorful fluorescent lights dispersed in the trees. Acting as the festival’s annual Kids Town, dedicated to children, this glistening ensemble imagined by Seiler is a versatile platform where young and old, art and film, social and cultural converge.

Complementing Seiler’s spatial palimpsest, situated at the entrance of the space, Swiss visual artist Maya Rochat (b. 1985, Morges)’s psychedelic video installation is projected on a 100-square-meter screen (20 x 5 meter), set on a scaffolding composition created by Seiler. Activated each night, this magical color bath invites visitors to enter an alternative, seemingly dysfunctional mind space mirrored throughout the rest of the Rotonda. Loans from the la Mobiliare collection, as are several of Seiler’s pieces, Swiss conceptual artist Julian Charrière (b. 1987, Morges)’s sculptures ponder the border between environmental science and cultural history. In a final addition, Turkish artist Ekrem Yalcindag (b. 1964, Gölbasi)’s over 100 specially designed ornamented pillows lie in joyful dialogue with Seiler’s Tschutschu.

An inherently versatile space, the Rotonda by la Mobiliare emerges as a bustling composition, where the plurality of spaces mirrors that of the experiences within it. After a year of isolation, it fittingly brings back and reinforces the essential social dimension of the event – and the social interactions that define it. Seiler explains:

“The composition is rooted in the idea of space as a canvas. I move beyond the canvas, from two to three dimensions, as various planes, proportions, senses, and intensities intersect and interact. The sampling of colors echoes the sampling of spaces, in turn prompting a range of sensorial, conscious and subconscious experiences within the same space – and only with visitors’ engagement does it fully come alive.”

The key marker of Locarno74’s parallel program, the Rotonda exposes once more the festival’s lasting commitment to engaging with its visitors and the social, cultural and political dimension of film. Reflecting Seiler’s emotional bond with the region, growing up not far from Locarno, it is his fourth collaboration for the festival with la Mobiliare’s Social and Cultural Engagement branch, with previous installations at Locarno’s Parco Balli (2017/18) and Castello Visconteo (2019). It also marks the latest of countless partnerships between Seiler and la Mobiliare over the years, among which the notable Pavilion Pollegio at the Gotthard tunnel (2016, Switzerland) and the Llloblyekk && Bboolyekk office furniture installation for the firm’s headquarters (2015, Bern).

“Culture, and in particular film, exerts a deep visionary power. The Rotonda is an ideal meeting place, a space where ideas stimulated by the vitality of the festival converge and develop. Social encounters are essential to the development of not only the individual, but to that of our societies – and in that, 'Come Together' is truly a call-to-action.”

Image credit : Kerim Seiler, 'Tender is the Night', 2020, installation for the Locarno Film Festival 2021, in Switzerland. Photograph by Ariel Huber.