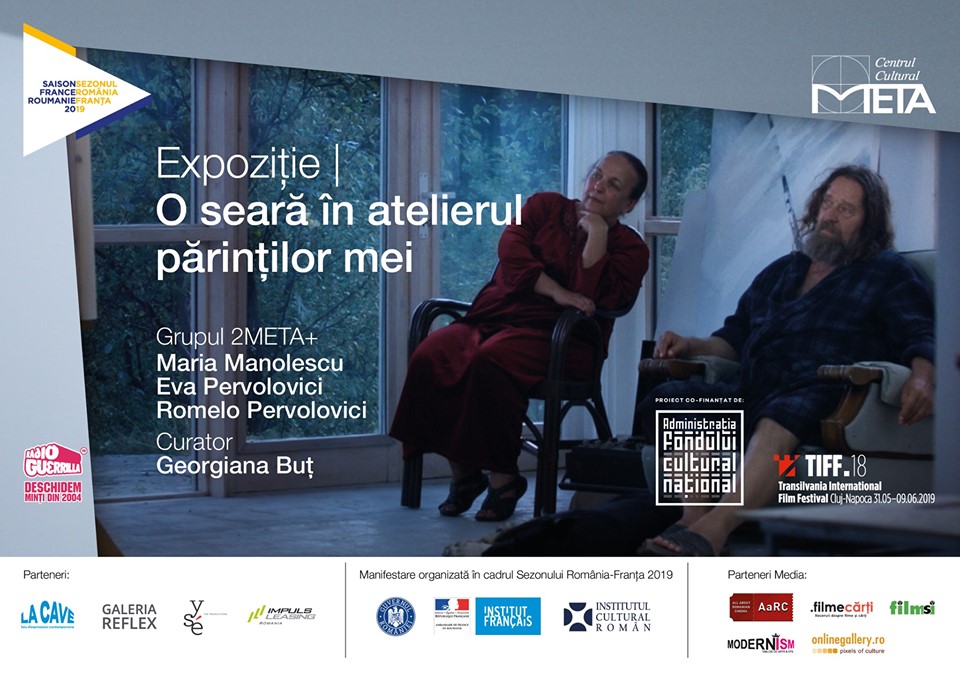 "An evening in my parents’ studio" at TIFF.18

The exhibition proposes a reflection about passing on the imaginary in a family of artists: the couple Maria Manolescu-Romelo Pervolovici and their children, an urban architect and a director, united under the name Grupul 2META+. The project starts from Eva Pervolovici’s eponymous film, in which the director uses the means of autobiography to explore her parents’ pictorial practices, and equally, the role of artistic inheritance in shaping her inner world and her cinematic style. ’’An evening in my parents’ studio’’ thus becomes the story of the artistic coming of age of a director.

The narrative is conveyed through exhibition, which brings together, in complementarity, film, painting, sound design, and exhibition installation. In a scenography created by Radu Pervolovici, painting and film are alternated in order to generate a continuity between the discourses of various media, but also as a metaphor of the artistic bond between generations.

30-year old Eva, a director settled in Paris, visits her family in Romania. Upon entering the studio, she discovers in her parents’ canvases, parents who have returned to painting, elements recognizable in her work, fragments of memory, ’’childhood dreams and dreamt films” (E.P.). Her decision to make a film rekindles a childhood wish – Eva used to outline film ideas in her diary that she communicated to the future Eva. Starting from the question ’’Is there a genetic imaginary, creativity cells, a common memory that is passed on from parents to children?’’, the director begins her autobiographic research.

The two parts of the short film – childhood journeys and the journeys of the woman who creates – correspond to the two chapters of the exhibition narrative, dedicated to her parents’ paintings: ’’My father’s paintings” and ’’My mother’s paintings”. Maria Manolescu and Romelo Pervolovici have distinct practices that share the meta component and post-conceptual aesthetic paradigm. In their paintings there are ’’images that always invoke other images” (Maria Manolescu), and the intertextual play and plurality of discursive layers converge in that type of image ’’aware of its character of image” (Victor I. Stoichiță).

The studio is rendered within the exhibition space through cinematic narrative, but also through scenography. Canvases, the music played in the studio, and the two protagonists in the final scene of the film belong to the world the works have been created in, and are integrating in an exhibition installation which reduces the distance between the production and exhibition space (the studio and exhibition itself). Using film, paintings, sound design and architectural elements, Radu Pervolovici aims at articulating the concept of the exhibition in the three-dimensional space, while also capturing the cooperating spirit of the 2META+ group.

Grupul 2META+: Reunited since 1998 under the name Grupul 2META, Maria Manolescu and Romelo Pervolovici have been developing since 2010/11 a mutual interest for painting and two distinctive aesthetics, after a period of experimentation during which they worked in various media, exploring the notion of ’’meta”. Grupul 2META+ was born by extending the initial duo to a quartet, including the two artists and their children: a director and an urban architect. Together, they contribute to disseminating contemporary Romanian art on a national and international scale through the activity of META Foundation, cultural project to which the entire family is dedicated.
Eva Pervolovici (b. 1984, Bucharest) lives and works in Paris. In 2011, her short film Little Red was included in Berlin Film Festival and won the award ’’Cannes à la Flip” for the best short movie. Her debut feature film was Marussia, shown at the festival in Berlin in 2013, within Generation competition.

Radu Pervolovici (b. 1987, Bucharest) lives and works in Bucharest. He has been the Director of META Cultural Foundation since 2011, of the Young Artists’ Biennial, starting with the 5th edition, as well as the initiator of the online projects A century of Romanian sculpture and A century of Romanian architecture.