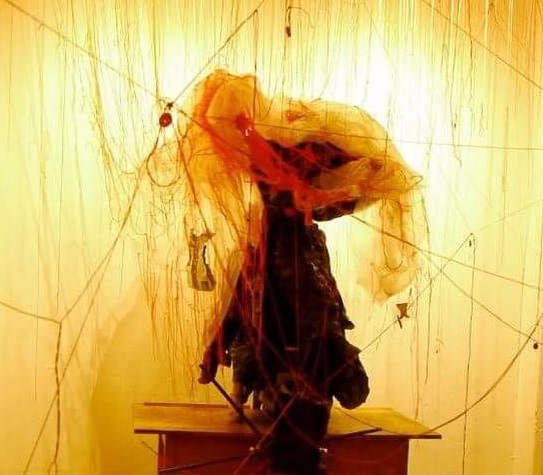 I have been hanged on the wall, silent, for so long.
Not for fear but for love, to forgive you and protect you.
But how many women have been doing this?
How many have been silent and alone?

Between blood and tears
a gentle touch of pure light have showed me something
I have within
in which I can believe and trust again
That each of us have.
Beyond my body shape,
Beyond my name and language
A shining drop,
A flower within is waiting to be bloom
As the magma to explode
Aka,
Like the blood,
Like love,
Like Japan
The beautiful island
Where I don't belong to.

For her solo project Tiziana Longo /Motimaru dance company/ chose not the easiest theme - women and female world - a research based on her own story and stories of many women she met on her way. Touching the female issue one risks to get drowned as the story inevitably deepens layers of suffer and passion. Unexpectedly, the spectator is bestowed with the magical metamorphose, the pulsating joy, delight and fascination of life.

Tiziana Longo is a director, choreographer, dancer specialized in Japanese Butoh, a postwar avant-garde movement art form.
Since 2010, she is directing Motimaru dance company together with Motoya Kondo.
The company is rooted in butoh and keeping a red thread faithful to the founders Tatsumi Hijikata and Ohno but also concerning about how to expand butoh in the wider context of contemporary performing arts.

After studying Performing Arts in Bologna University, she has trained for 5 years in Japan at the Kazuo Ohno Dance Studio and has been working for several years with Yoshito Ohno, son of Kazuo Ohno, as stage assistant and dancer. She has received precious lessons also from Mitsuyo Uesugi, Tomiko Takai, Yukio Waguri, Seisaku and from Susanne Linke.

"I dance because I have a strong reason of living,
In my dance I bring what is invisible visible.
Before going on stage I always pray that a flower in me and in the audience could bloom and that the space would be rich"

Her solo works Frida, Kawaki, Seppun, Yudo, have always been performed in Tokyo.
As Motimaru she has been performing with Motoya Kondo in: the finale of the Marathon of the Unexpected at Venezia Biennale 2010, NoBallet 2014, and have been performing and teaching in Europe, Asia, Australia in over 30 cities.