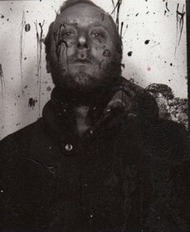 Kottie Paloma is an artist who delves into the ridiculousness of life. In his paintings, drawings, books and sculptures, he explores the darker sides of society in a humorous yet poignant and gritty manner. Many collectors consider his art the darker side of pop. In his new 2014 abstracts, all notions of solid imagery and text have vanished and are now replaced with a glowing dumbness that informs one of a spirit outside the self. This spirit floats in a consciousness of his earlier work but in a dragged through the street sort of way. The use of glitter is more prominent in his new paintings and is used as though it is itself the paint. For Paloma, there is no difference between the standard idea of paint and the use of glitter as a form of vocabulary to represent
new ways to use and approach materials. His new 2014 abstracts serve as the middle ground between his sculptures and his earlier and still present comic based paintings. Paloma’s art is in private and public collections throughout the United States and Europe. Some of the public collections include MOMA in NYC, Harvard and Stanford University and the Bavarian State Library in Munich to name a few. Paloma’s first survey catalog of his work published by Pogo Books in Berlin titled “XOXO” is now in the public collections library at the Tate Modern London.