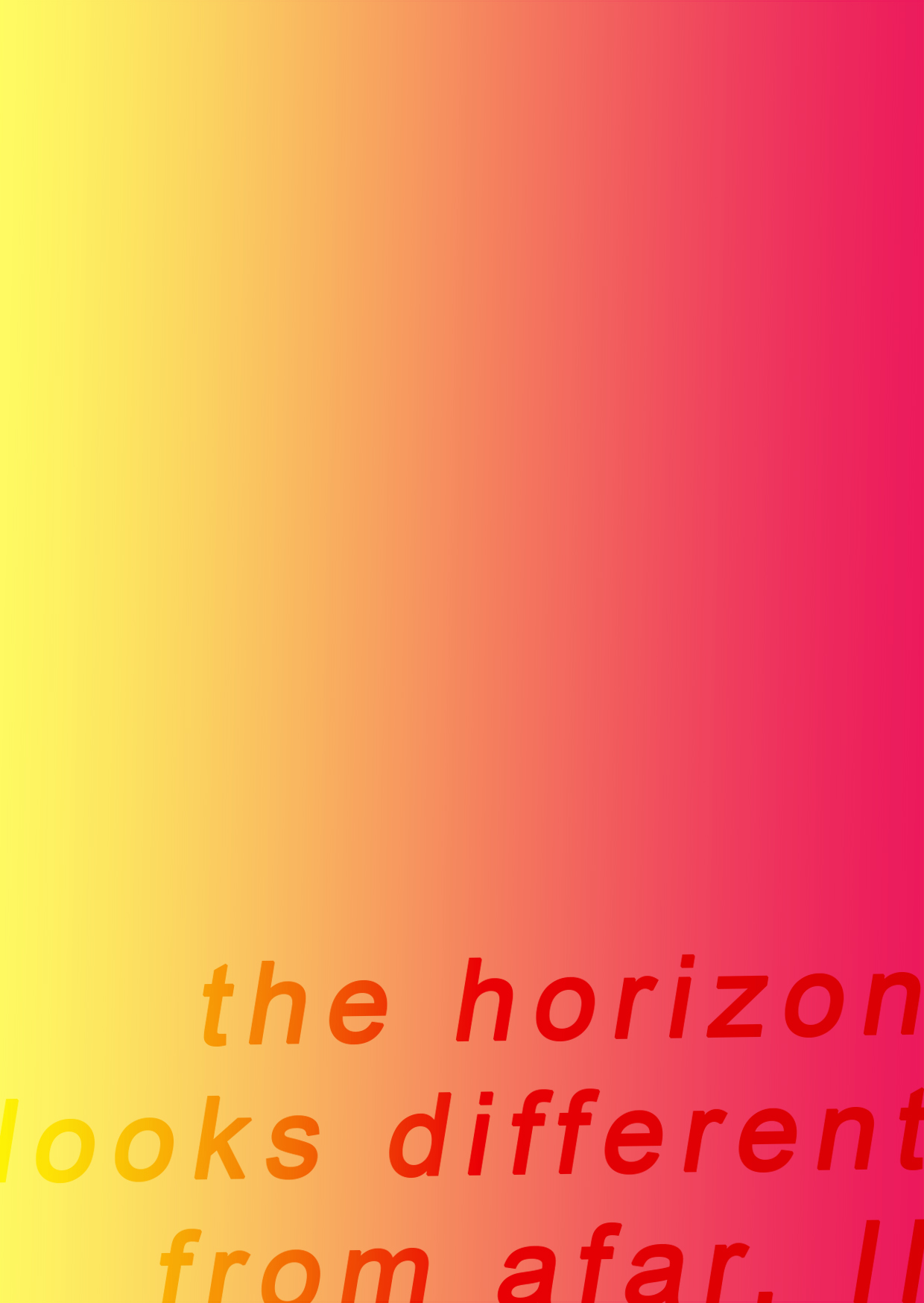 A group exhibition by pilote. After "the horizon looks different from afar." at Kunstquartier Bethanien in March 2019, pilote is now following the invitation of Dr. Sven Sappelt and will display an exclusively #2 at CLB Berlin at Aufbau Haus.
This opportunity of a second presentation of "the horizon looks different from afar." led to a deepening of the original theme about borders as well as the extension to include the so called "common ground" aspect. Therefore besides individual works from the first exhibition newly developed works will be shown by

The confrontation with the ubiquitous theme of the border and the terminology of the correlating different perceptions that was strongly noticeable in the original exhibition remains significantly even now: What is a boundary, what are borders and which connotations go with their manifold use and contemplation? And how is their symbolism in the collective imaginary represented and understood in different socio-cultural areas?

For the exhibition at CLB Berlin, the artists are extracting theses that have already been established in the group show at Bethanien. But the current exhibition project also deals with the question of what basically holds a society together. What forms the "common ground" that the individuals of a fragmented society share with each other, that connects them, even if it separates them from each other? "Common ground" is not understood statically here, but dynamically. Thus the result are multiple considerations of the artists, based on personal experiences and individual reflections.

The artists extract differentiated dimensions and micro contexts of the topic that are most relevant to them and express their own assumptions in the fields of photography, film, painting, drawing, sculpture and installation. The new works that were developed for this second edition of the exhibition, which will be not only theoretical opposed to those previously seen at Kunstquartier Bethanien.

BETTY BÖHM (*1979)
is an observer of socio-political spaces and structures as well as psychological phenomena arising from them, which force people into certain patterns of thought and action. A need to expand one's own horizon and, in encounters with strangers, discover original similarities as well as new commonalities in order to finally overcome boundaries is of particular concern to her.

The impressions and experiences gathered during a residency in southeastern Turkey result in the engagement with the found surveillance architecture on site and the politically controversial Atatürk dam on the one hand, as well as the warmhearted connection with the local people, which finds expression in the omnipresent collective dancing. Of particular interest are energetic imprints with lasting effect, which are stored in the respective places and are also anchored in the collective consciousness. The artist formulates inner images by integrating subconscious levels of thought, which, beyond the political and social situation, unfold their very own subjective poetry.

Betty Böhm studied at the State Academy of Fine Arts in Stuttgart and at San Francisco State University and received awards such as the Baden-Württemberg Scholarship and the Landes-Graduierten Scholarship (BA-WÜ). In 2018 she was supported by the German Foreign Office/Kleiner Kulturfonds within the framework of a residency in Adiyaman, Turkey.

is primarily concerned with forms of spatial perception. Her work oscillates between the construction and deconstruction of space. The themes of the dissolution of space and the dissolution of images through the World Wide Web are the starting points of her current works. In her most recent projects on spatial image and pictorial space („ Raumbild und Bildraum “), interfacial space and surface area, she deals with map images from Google Earth, in particular with 3D views of cities and architectures. The artist is particularly interested in the aesthetic momentum of the technical images and their spatial extent and researches questions about perception. The virtual space of the Internet contradicts the political-geographical space: i.e. the dislimitation of digitalized space - circulation of images, places, spaces, networking - on the one hand and the delimitation of space by political boundaries (national borders, nation states) on the other. This contradiction of spatial perceptions is part of the discussion in the works of Kathrin Ganser. In the artist's view, the worldwide resurgence of national borders is a witness of this in current political events. Through their history of origin, the picture cards refer to issues of geopolitics and, ultimately, to the question of which common ground is to be talked about.

Kathrin Ganser studied at the Kunsthochschule Halle (class of Una H. Moehrke) and at the Universität der Künste Berlin (class of Katharina Sieverding). She received her Ph.D. Fine Art in 2014 from the Bauhaus University in Weimar with a thesis on the 'Media Space Image'. In addition to a scholarship from the Bauhaus University Weimar, the artist also received the Art Prize of the City of Kempten in 2017 amongst others. Her solo exhibition Performanzen can currently be seen in the Neue Galerie im Höhmannhaus - Museums and Art Collections Augsburg until the end of April.

works mainly in the media of painting and drawing. Often she creates expansive installations, that seem to enter in symbiosis with the exhibition space. The artist intensively questions the between outside and inside world, between perceptions and seeing, between the memory and the present. The artist chooses the natural space to trace these questions. She presents different ways to see, experience and process the natural cosmos. "Anavilhanas 2" is developed in the Brazilian Amazon Rainforest. Immersing into this dense surrounding the visual, tactical and aural impressions give impulses to the drawing practice of rubbing paper across tree trunks and earth, of drawing with seeds, flowers and fruits. Hihn is creating traces of her communication with the forest's energy. Glass, the material of "Cachoeira" creates fluid transitions between image and environment as a medium for painting. Colored shadows expand into the space and reflections interfere with the picture. Applications of photographs of the artist's travels suggest what is seen, the painterly execution of what is perceived and remembered. In the work of Carla Mercedes Hihn nature is translated into graphic language: it is the perfect geometry that connects all species in the harmony of chaos and order beyond all borders.

The Romanian-born artist studied at the Berlin University of the Arts, where she was a master student in 2008, and at the University of Fine Arts in Lisbon. Since 2017, artist residencies have taken her to Brazil, where a large proportion of her work was created in the Amazon region, for example, and is still being created today. A residence program sponsored by the Goethe-Institute Abu Dhabi also invited her to Dubai in 2013.

"Surface Areas" is the title of the work the artist created for the exhibition "the horizon looks different from afar. II" at CLB Berlin. The drawing (3 × 4 m) will be installed in the exhibition space like flowing from the wall into the gallery space. The layered drawings are traversed by cut outs, through which further layers become visible. Long strips of paper weave through the drawing and turn into the room, only to disappear behind the paper again. The viewer is deprived of the natural horizon line: the fixed location is replaced by a new perspective and the horizon as a place of longing is obsolete. In her works, Katja Pudor makes the process of the creation of an artistic work visible. The non-static, the fragile and the change are immanent in the installations and performances of the artist. She constantly explores new ways of how the "recent past" (according to Walter Benjamin) as past and present can be made perceptible at the same time. Subversive (image) spaces emerge in which various sediments of memories, meanings and references become exposed and thus visible in the sense of an "archaeology of the present".

Katja Pudor studied at the Kunsthochschule Weißensee with Katharina Grosse, among others, and was a master student in 2005. The artist has received numerous scholar-ships, including from the Ministry of Science, Research and Culture of the State of Brandenburg (2016) and the Hans Böckler Foundation (1999-2005). She took part in several artist residencies in Switzerland, Germany and Austria and was a participant in the Goldrausch Women Artists Project in 2008.

will show excerpts from her work 'The Kingdom', begun in 2018. She examines the conditions and relationship of space, pictorial space, surface and structure. The starting point of her experiments is the ancient excavation site Perrhe, which belongs to a mountain range of the former kingdom Kommagene in the southeast of Turkey (ca. 200-50 B.C.). A kingdom whose ruler "Antiochos" was able to cleverly bundle different religions and secure the kingdom for a long time against hostile takeovers, for example by the Romans. Similar to an "archaeologist", the artist collected a variety of photographic material on site. By means of photo collages, photo installations, video, sound, archive material, and classical photographs, 'The Kingdom' on the one hand expands structures and conditions of two- and three-dimensional space, and on the other hand takes them ad absurdum. In addition to these pictorial aspects, thoughts on space and representation, architecture and power as well as space as a common good are also raised and questioned.

Sarah Straßmann holds a Ph.D. Fine Art from the Bauhaus University Weimar (2018) She received numerous projects, travel, and studio grants and scholarships, and was the 2008/09 winner of "gute aussichten - junge deutsche Fotografie.
In July 2019, Sarah Straßmann's work will be honored in the solo exhibition Expanded Pictures at Kunstverein Konstanz.

ARTIST TALK: 23 MAY 2019, 7 pm
The cultural scientist Dr. Anna-Lena Wenzel and Dr. Sven Sappelt (CLB) in conversation with the artists about their works, the context of the exhibition and the annual theme of the CLB "Commen Grounds".