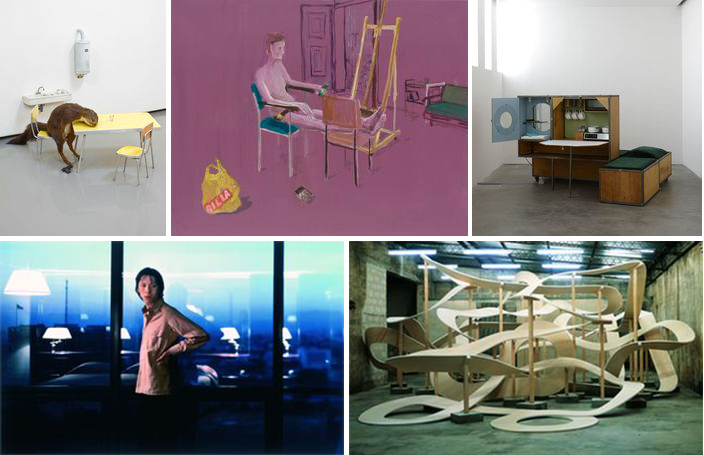 STANZE / ROOMS - Works from the Sandretto Re Rebaudengo Collection

The Turin-based Sandretto Re Rebaudengo Collection is about to go on show at me Collectors Room Berlin, from 2 May to 21 September 2014. In this first ever exhibition of works from the collection in Germany, entitled ‘Stanze/Rooms’, the Italian collector presents us with her view on the international contemporary art scene. And, in a parallel display, Patrizia Sandretto Re Rebaudengo also offers visitors an insight into her internationally acclaimed costume jewellery collection.

The Sandretto Re Rebaudengo Collection
Patrizia Sandretto Re Rebaudengo is one of the most important private collectors of contemporary art in Europe today. Initiated in the early 1990s and continually expanding ever since, her collection now consists of over 2000 contemporary works in various media by both emerging and internationally renowned artists. The Sandretto Re Rebaudengo Collection has been presented in museums in Italy, France, Spain, Austria, Poland and UK, including a year-long show at the Whitechapel Gallery in London. The collaboration with the Olbricht Foundation began last year when the Fondazione´s Centre of Contemporary Art in Turin hosted an exhibition of Gerhard Richter Editions from the Olbricht Collection.

The exhibition ‘Stanze/Rooms’
In Italian, the word stanza originally signified a ‘standing, stopping place’, a room where the poet could withdraw to and find inspiration. It is at once a physical or metaphorical room, its windows look out on the lively and shifting horizon of our thoughts and visions. The exhibition ‘Stanze/Rooms’ takes this etymological sense as the starting point for the display and attempts, through a series of contemporary artworks, to recreate the idea of the stanza as the personal habitat of poetic reflection. These stanze are imaginary or real places – ideational, quotidian, or simply beyond time. Bristling with references to current events, cinema, music, literature, and art history, the works awaiting the visitor are rendered in an array of different media. These include sculptures, like A to Z 1994 Living Unit by Andrea Zittel (a conflation of dwelling, furniture, and large suitcase), environments such as UHER.C by Robert Kuśmirowski (for all appearances some kind of recording studio of yesteryear that has taken on a life of its own), photographic works such as James Casebere’s Toilets and Asylum, which depict rooms in psychiatric hospitals, and video installations such as Travesty of a Mockery by Sam Taylor-Wood, which shows a confrontation between a couple on two separate screens. In her series Chambre, meanwhile, Dominique Gonzalez-Foerster uses everyday objects to reconstruct the bedrooms of private individuals, among them collector Patrizia Sandretto Re Rebaudengo herself.

The costume jewellery collection
Running parallel to ‘Stanze/Rooms’ is a display of bewitching pieces of costume jewellery from Patrizia Sandretto Re Rebaudengo’s private collection.
In the 1930s, during the Great Depression, serially manufactured jewellery made of inexpensive materials gained in popularity. With its original and elegant design, costume jewellery reached women of all social strata and became de rigueur accessories in Hollywood and haute couture. These objects belonging to Patrizia Sandretto Re Rebaudengo, on show in the Olbricht Wunderkammer, offer a glimpse of a unique, much larger collection and tell the story of the history of American fashion jewellery from the 1930s up to the present day.

Accompanying the exhibition are a collector’s talk with Patrizia Sandretto Re Rebaudengo in person (3 May, 3 p.m.), a reading (11 June, 7:30 p.m.), workshops for children and young people, and guided tours (every Saturday, at 3 p.m.).