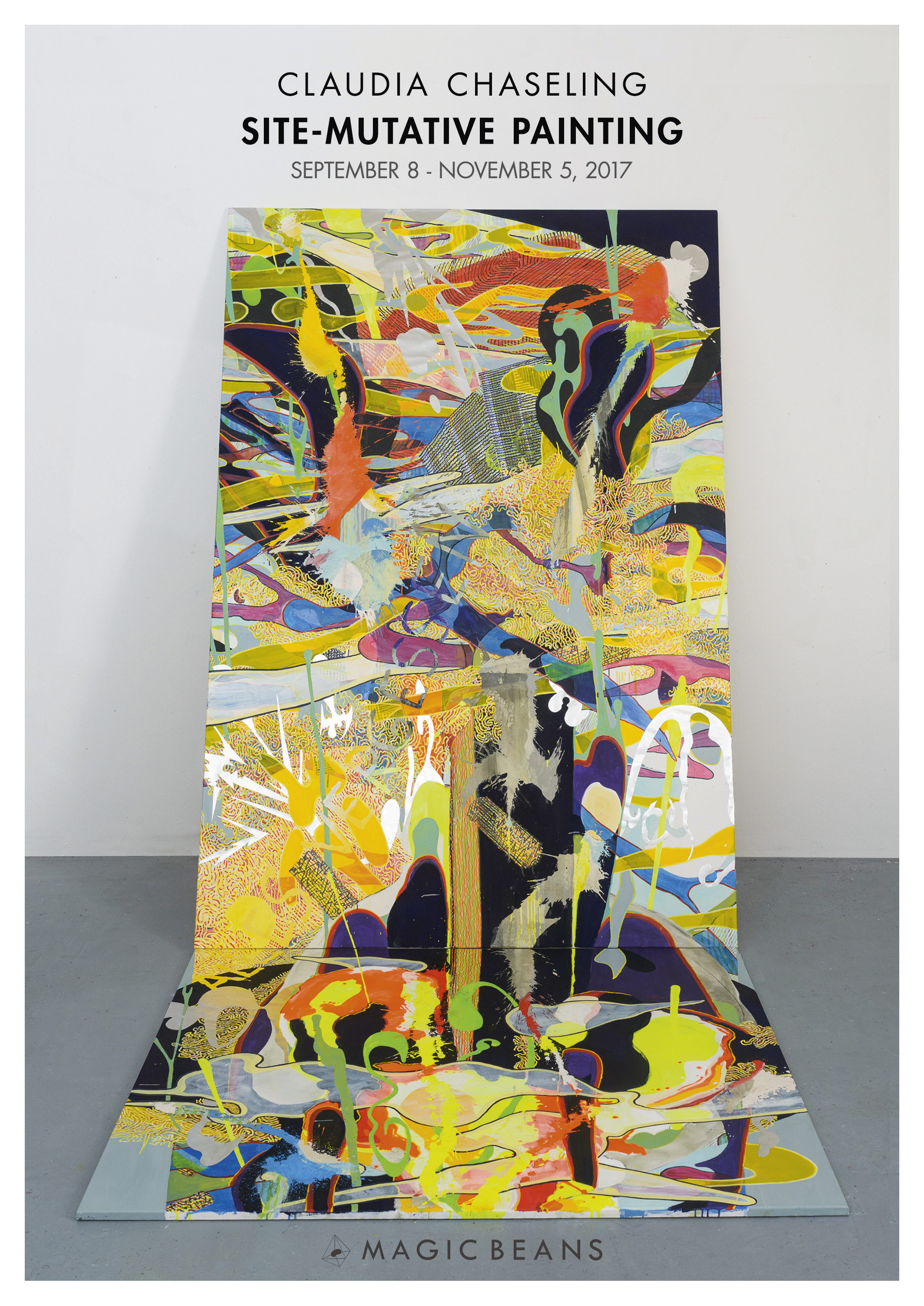 Daring and without fear of big topics, Claudia Chaseling´s expansive paintings connect very different vocabularies, visual finds, texts, sources, and references to highly charged image sequences and spatial works which bring conceptual rigour and sensitive imagination, order, and chaos into an insoluble whole. The motifs - distorted landscapes, organic forms, and glaring wave structures - tip, break, and inundate one another and lead back to foundational examinations and the questioning of being-in-the-world. This generates works that suddenly change the exhibition space and the perceptive space of the viewer. Chaseling creates visual events that continually discard themselves, turn around, and begin again differently. They perform sudden “rabbit jumps”- and thereby always offer unforeseen visual paths. The convulsive, bright - at first glance abstract - image spaces are under lied by the barbaric excesses of violence returned to the
Occident, and by tormented nature that, as insignia of a feral self-assertion of man, make this present. An emphatic doubt takes the place of modernity´s emphatic belief in progress and its artistic analog; a doubt, that is no ideological addition, but arises entirely from the conflictive, painterly forms. Painterly magic becomes reflection; reflection becomes image magic.

Chaseling´s turbulent landscapes provide a world d´après nature, beyond utopia. The threatening, often invisible or imperceptibly announced changes and mutations in nature and society, here the contamination with radiation transforms itself into energy-charged spatial painting. Literally unsettling and without didactic overemphasis, these images reflect on how culture makes itself the pledge, the scourge of ideologies, the ultimate ratio of murderous acts of self-differentiation. These images illuminate the disastrous alliances in which the desire for territory is attended by terror, how longing for foundation bears fundamentalism: every religious service can pervert into an unholy war.
The insanely coasting dynamic of the images creates an insoluble oscillation between the things you can see and the things you intuit - between what you think you know and what you sense - and you can not get out any more. The baroque fold-ins of contradictions, which of course are also a figure for the new fragile-systematic thinking, for an awareness of crisis in view of the illusory character of all order, become form and formative in this instance. In all precision, diffuse objects develop - and their space can no longer simply be classified into outside and inside. Rather, the contradictions amalgamate to transitions to another spatial continuum. The serious play with the contradictions of
image opening and blockade, with addition and conglomeration, with mirroring and theatricalisation, the exciting becoming and the interlocking of that becoming with the space are also inventions of the baroque era, which Chaseling recharges and re-presents with confident verve. Chaseling collects the material of the world in her paintings, and in the active process of understanding and of transformation she charges it. At the same time, the artist´s reception is such that being and experience are introduced into every production. The painterly transformations do not arise from cool observation or vivisection; they are more of a risky obligation, a vouching answer. Responsibility arises as a reaction and in this response to the treated material. Claudia Chaseling does not avoid this burden of art, her critical, keen reactions blow open complex meaning, rendering it as sensual experience into insight and discovery at once.

This exhibition is supported by the Australian National University