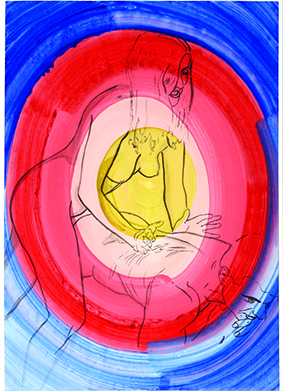 The complete editioned works of Sigmar Polke, one of the most important contemporary
artists, will be on view from 28 April until 27 August 2017 at Berlin at me Collectors Room,
featuring approximately 200 works from the collection Kunstraum am Limes.

The artist’s editioned works hold a special place within his oeuvre. For Sigmar Polke (b. 1941
Oels, now Oleśnica/Poland, d. 2010 Cologne), editions were a further opportunity for
intensive and excessive variations on his experiments, allowing him to stage a confrontation
without end between himself and the world. Like an alchemist, he expected different
techniques to bend to the will of his creative ego and so his editioned works comprise
objects, books, portfolios, photographs, photocopies, collages, and numerous prints.

Polke never allowed technique to dictate the progression of his artistic work. In part, he
transformed identical prints into unique objects by altering the foreground, background, or
layering. The Kunstraum am Limes Collection thus contains several variations of copies of
the same edition, including, for example, Freundinnen I (Girl Friends I, 1967), Reihertanz
(Heron Dance, 1997), or Sauberes Auto (Clean Car – High Spirits, 2002). Other works are
compositions consisting of several layers and printed on both front and back, such as Leave
the Lab and Enter the Office (1980–91) or Eisberg (Iceberg, 2001). Figur mit Hand (Es
schwindelt...) (Figure with Hand, Dizzy..., 1973) and Danneckers Hausgecko (Dannecker’s
House Gecko, 2009) are serigraphs and lithographs, printed on textured, flocked paper
embossed with snakeskin. On closer examination, the ‘dot’ print, a hallmark of Sigmar Polke
paintings, becomes visible through the specific surface structure.

Sigmar Polke’s images are products of his world and surroundings. They reveal many traces
of the changing society of the postwar years. Trivial scenes, the banality of everyday life,
ambitions of the middle classes, national and international politics – all of this, he put under
a microscope to consider and analyze. This enabled him to convey a unique picture of
reality, shot through with irony, humour, and pointed criticism.

The artist worked concurrently with different techniques; his editions and his painting
should be understood as symbiotic. Created in tandem, each extends the other’s existence.
They feed on each other. A selection of Sigmar Polke’s posters will be presented in parallel.

The exhibition is curated by Tereza de Arruda.

On the occasion of Sigmar Polke – The Editions a catalogue will be published through
Walther König.

Sammlung Kunstraum am Limes
All artworks in the exhibition Sigmar Polke – The Editions are part of the Kunstraum am
Limes Collection. Its founder, Dr. Axel Ciesielski, worked systematically with gallerists
Erhard Klein and Christian Lethert from 1997 to 2009 to build up this segment of his
collection. The collection is the only one in the world that contains the complete editioned
works of Sigmar Polke. Since 2009, the collection has been shown at various international
institutions, including the Oldenburger Kunstverein (2010), the Museu de Arte de São Paulo
(MASP, 2011), the Museum für Gegenwartskunst Siegen (2013), and the Museum Les
Abattoirs in Toulouse (2014).